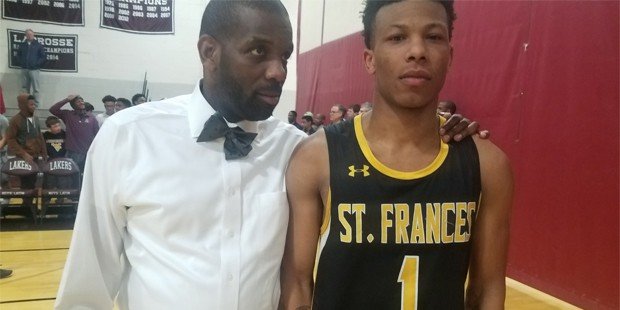 A year ago at this time, St. Frances Academy appeared destined for a spot in the MIAA A Conference basketball finals only to suffer a shocking home loss to upstart Boys’ Latin School in the league semis. The Panthers did not forget.

On Thursday, in a MIAA A Conference semifinal rematch, this time at BL’s Gelston Center in Roland Park, fourth-ranked St. Frances absolutely steamrolled the No. 7 Lakers from the outset, rolling to an 81-47 victory. Combined with the Panthers’ 104-64 quarterfinal win over Annapolis Area Christian, St. Frances has now won two playoff games by a combined 74 points.

In Thursday’s other A Conference semifinal, No. 3 Mount St. Joseph trailed visiting 11th-ranked McDonogh by eight points with one minute left in regulation, but rallied to tie, before pulling off a 69-64 overtime victory, and advancing to the championship game.

St. Joe, which won both of its regular season meetings with St. Frances, will battle the Panthers in the MIAA A title game, Sunday at APGCU Arena at Harford Community College at 5:30 p.m.

The Panthers (32-5 overall) were led by sharp-shooting junior Adrian “Ace” Baldwin, who swished six three-pointers, and finished the night with 21 points to lead all scorers. In addition to his brilliant offensive display, Baldwin did a fantastic job on defense, limiting Boys Latin’s high scoring Cameron Spencer to 18 points, six of which came from the free throw line.

The Panthers came out like a house on fire and took an early and commanding 19-6 first-quarter lead. The Lakers (30-6) were game, but no match for the intensity and efficiency St. Frances displayed on this evening. The Panthers piled it on again in the second quarter and had virtually punched their ticket to the finals with a resounding 42-19 lead at the intermission.

As someone famously once said, “If this was a fight, they would have stopped it.”

According to Baldwin, the Panthers prepared to lead with their defense.

“We worked on defense in practice yesterday, and it showed up well today,” said Baldwin. “We stayed disciplined from the beginning to the end, and our main focus was to shut down Spencer and that’s what I did tonight.”

“The key tonight was our defense,” said Brown. “We share the ball on offense and we communicate, but tonight we probably played our best defensive game that we’ve had all year. We played hard and we were hitting on all cylinders.”

Myles said his team is focused on one thing.

“The guys stayed focused,” he said. “Winning the championship has been our goal from day one, and we’re really coming together as a team. Defense is the key to our team. Offensively we can get it from many angles, but if we play defense like we played tonight we’re going to be pretty good.”

Lakers coach Cliff Rees, who led his team to a school-record 30 win season, summed it up succinctly.

“They were great from top to bottom,” said Rees whose squad was never the same after a late-season ending knee injury to senior point guard Cameron Watts. “Every kid played great. They played hard and they played aggressively.

We played hard too, but they were really good, and they prevented us from scoring, and from staying in the game early. Nick does a great job. I’m proud of our team. This year’s team was all heart. We just got outplayed tonight.”

In Irvington, senior James Bishop was the hero for the No. 3 Gaels (26-6). Not only did the LSU commit score a game-high 32 points, he drained a game-tying three-pointer at the buzzer and then scored six points in overtime.

“We went to five guards and was able to force a couple of turnovers,” said Mount St. Joseph coach Pat Clatchey. “They’re [McDonogh] really good. We just kept at it.” 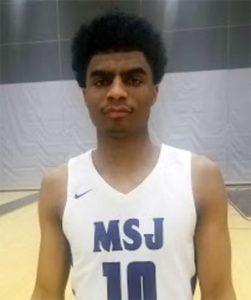 St. Joe senior star James Bishop poured in 32 points including a buzzer beating three-pointer, to force overtime, as the Gaels staged a dramatic comeback to reach to the MIAA A finals.

If not for Bishop’s late heroics, Dave Brown would have been remembered for getting McDonogh to the MIAA A final.

Brown, a sophomore, was on fire early as he scored McDonogh’s first 15 points in the contest and helped the 11th-ranked Eagles (18-9) build a nine point lead, at 20-11, after one quarter. He finished with 30 points, and senior Drew Green added 13.

St. Joe fought back to within one before the half, but the Eagles created separation once again in the third quarter and led 45-36 heading into the final stanza. The lead reached its peak midway through the fourth and McDonogh was able to keep the lead in the 8-10 range all the way to the final minute of regulation.

But the Gaels put together a breathtaking comeback, earning a rematch with their East Baltimore foes. In December, Mount St. Joseph traveled to Phelps Gym and claimed a 74-63 victory. Last Friday, in front of a standing room only audience at Smith Center, the Gaels built an early double-digit lead before holding off the Panthers, 66-63.

“Hats off to McDonogh,” added Clatchey. “We reached a point in the game where we developed a refuse to lose attitude. We made plays with contributions from all five on the floor. James made a great shot to force OT. We just found away to win.”

Another huge crowd is expected to converge on Bel Air for the latest chapter in arguably the best rivalry in Baltimore high school hoops. The teams last met in the MIAA A final in 2016 at UMBC’s RAC Arena with St. Frances taking a 75-67 decision.

Pictured above: A coach and his Ace. St. Frances coach Nick Myles show some appreciation for junior star Ace Baldwin, who led the Panthers to huge MIAA A Conference semifinal win at Boys’ Latin.