St. Mary’s drops No. 19 Curley for first in MIAA B football; Wicks rushes for 159 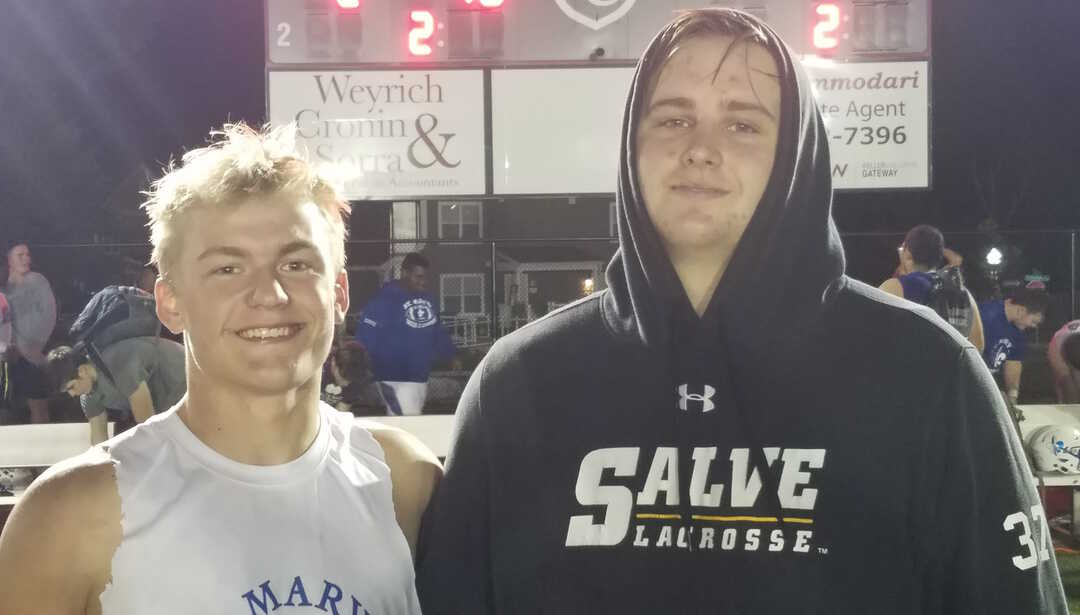 Alex Wicks (left) had 159 yards and two rushing scores, and senior linemen Quinn Donoway got into the end zone after recovering a fumble as No. 16 St. Mary’s remained undefeated in MIAA B Conference football play. The Saints defeated previously undefeated and 19th-ranked Archbishop Curley in Baltimore City.

Trailing early, the No. 16 Saints dominated 19th-ranked Archbishop Curley the rest of way in a 36-7 decision in a MIAA B Conference contest Friday evening in Baltimore City. Senior running back Alex Wicks rushed for 159 yards and two touchdowns on 32 carries for St. Mary’s.

The two-time MIAA B champs from Annapolis again leaned on its running game and solid defense to remain undefeated in league play at 3-0. The Saints have won 12 of their last 13 league decisions.

“Our theme this week was who is going to be tougher longer, Curley is undefeated and a good team, but we just kept grinding away and that is what we do,” Saints coach Jason Budroni.

The Saints answered, going 80 yards drive in 13 plays, capped by a 4-yard from Wicks. The University of Maryland lacrosse commit broke the tie in the third quarter, juking past one Friar defender and weaved his way to the end zone on a 14-yard rushing touchdown to complete a 10-play, 70-yard drive with 9 minutes remaining in the second quarter.

“Alex (Wicks) he is a competitor, for a little kid he keeps coming, Budroni said. “He is strong runner and our line does great job blocking for him.”

The Saints got the ball back into the red zone after forcing Curley into a three-and-out, and handed off to Wicks to finish off another drive. The ball was dislodged from Wicks at 4-yard line and popped into the air.

Donoway was in the right place at the right time, hauling the ball in and dove into the end zone for the score. Donoway, who mainly plays on the defensive front, was subbing on the offensive line due to an injury.

“Surprisingly that was my first touchdown and hopefully get a chance to do that again,” Donoway said. “I’m pretty agile for my size, so when I got the ball I knew what I was doing. I was going to the end zone and bring the thunder.”

Gray-Dantzler put on the jets and ran 60 yards for a touchdown to start the final quarter. Blair rounded out the scoring for the Saints with a 4-yard scoring run.

Off to its best since its undefeated 2013 MIAA B title season Curley (4-1, 2-1 MIAA B) was unable to get over 200 yards offense Friday against St. Mary’s defense.

“We didn’t respond well to adversity,” Curley coach Brendon Ireton said. “We got to flush this game, put it behind us and adjust. We got to forget about this game because their five weeks of football left and there is a lot of ball to play.”