The Baltimore area will be strongly represented in the 1A and 3A state dual meet tournament on Saturday at North Point High School in Charles County. Local squads won the North, South, and East titles in both divisions.

Sadly, most of the regional dual matches were very one-sided. No region showed this more than the 1A North, where Dunbar won its opener 70-6 over Edmondson/Westside, then blanked ACCE, 76-0, in the finals.

Dunbar had to tangle with Owings Mills and Sparrows Point on a yearly basis when the duals were in the 2A/1A format. Even the first two years of the 1A division left the Poets dealing with the Point. This year though, Sparrows Point moved up to 2A and Dunbar capitalized (although the rankings did favor Dunbar if they were to have met Sparrows Point).

“We’re 2-5 in regional duals finals,” Dunbar coach Doug McClain said. “In the course of a season, you have lots of ups and downs. I’m blessed to have a group of guys that bought into the team and produced a title for the school. It’s big that a city school is consistently competing for a state championship.”

As noted in VSN’s regional preview, Dunbar is the current favorite to bring home the 1A state crown this weekend.

Patterson Mill had to withstand a strong showing from a Perryville squad they had beaten 56-20 nine days ago. The Panthers put up a fight in this one, going down to the wire before falling, 39-30. The Huskies downed Colonel Richardson, 63-14, in the semis. Perryville won a barnburner over Kent County, 42-39.

Strange occurrences were the theme of the 1A South, where moments before departing for the trip to Fairmont Heights, Carver A& T was notified of a venue change, shifting them to Bladensburg High School.

Apparently, Fairmont Heights was experiencing a school wide quarantine and professional cleaning crews were being brought in. It didn’t just affect the venue either, as Fairmont Heights had to forfeit their match to Pikesville since the wrestlers could not attend.

Carver dismantled Gwynn Park, 69-12, before taking out its Baltimore County rival, Pikesville, 46-33, in the final.

Two-time defending 1A state dual champs Southern Garrett edged Williamsport, 37-36, in the West after blowing out Northern Garrett, 63-18. Williamsport downed Boonsboro 40-33 in the other semi.

The bracket for the state tournament puts Dunbar on the opposite side of Southern Garrett so they appear to be on a collision course for the championship. Dunbar was seeded fourth and gets top seeded Carver A&T, while Southern Garrett is the two seed and sees Patterson Mill.

C. Milton Wright was impressive in advancing to the 3A state semifinals.

The 3A division saw history made as C. Milton Wright captured its first ever region crown. The Mustangs made easy work of their rival, Bel Air, downing the Bobcats for the second time this year, 50-18 this time. In the finals, Wright beat Kenwood, 60-19. The Bluebirds got past Edgewood, 42-34, in their semi-final.

“In the finals, we started out a bit flat and lost some early momentum,” relayed Wright coach John Thornton. “The turning point was at 113 with Roy Hooe. He’s a first-year wrestler who was thrown into the starting lineup just three weeks into his wrestling career. He’s taken his lumps and now he’s starting to turn the corner. He’s no longer just filling the spot in the lineup. He’s become a real asset to the team. I’m looking forward to watching him grow over the next two years.”

Manchester Valley continued its stellar campaign with a 41-25 win over River Hill that was not as close as the score indicates since the match was wrapped up and the Mavericks chose to forfeit the final bouts. They ended Mount Hebron’s dual season with a 51-23 display. River Hill squeezed by Marriotts Ridge, 35-34, in one of the more exciting matches of the entire regional field.

In the South, Chesapeake of Anne Arundel County had little trouble with their foes, scoring a 58-12 win over Huntingtown in the finals and a 39-30 win over Northern Calvert that featured forfeits to close the action and draw the score tighter. Huntingtown blasted fellow SMAC team, North Point, 55-19.

Damascus worked their way to a potential seventh straight duals crown, coming out of the West with a 42-26 victory over Linganore. In the opener the Swarmin’ Hornets got by Magruder 54-20, while Linganore downed North Hagerstown, 43-32.

Damascus will be the No. 1 seed on Saturday and faces off with Chesapeake to start their day. Manchester Valley is seeded second and gets C. Milton Wright in the other semi.

Bumping up from 1A to 2A has not slowed the Sparrows Point wrestling team. The Pointers captured another regional crown on Wednesday.

Sparrows Point continued the blowout trend with a 60-15 slaughter of Owings Mills in their final. To reach that match, the Point ran up the score on Hereford, 66-12. Owings Mills got by Digital Harbor, 48-30.

“I thought we wrestled well,” said Point coach Mike Whisner. “The crowd was very supportive and got our wrestlers fired up. Shawn Wolford (285) getting the pin in our first match with Hereford got the ball rolling. The team wrestled hard and we are looking forward to the challenge of facing Stephen Decatur.”

Decatur is the state’s top ranked dual meet team and won last year’s 3A dual title before moving down to 2A this year. They are still undefeated after smacking Kent Island 57-6 in their final and Queen Annes, 62-12, in the first match.

La Plata garnered the second seed and won the south with a 58-12 win over Lackey. They will see five-time dual meet region champion, Glenelg, in the opener at North Point. Click here to read VSN’s Lem Satterfield’s coverage of Glenelg’s march to the West title.

Annapolis is the lone area rep in the 4A tournament. Their trip was earned by taking down county rival South River, 33-32, in a showdown that came down to the last match. At 106, Kevin Van Besien posted a 14-4 major-decision of Ben Travis to break the Seahawks back.

South River stormed back to tie it up with three consecutive wins of their own. Sean Adams rang up a tech-fall at 160, Lonnell Owens-Pabon planted Dmitri Sfakiyanudis in the 170lb bout, and Sam Hicks (182) eked out a 3-2 victory over Brandon Jackson.

The squads traded falls at 195 and 220 to keep things knotted up. Racheil Coney won an overtime battle with Alex Ditto, 3-1, to put South River ahead, 32-29, and set the stage for Van Besien to fill the role of hero.

The state bracketing turned out favorable for the Panthers as they were awarded the No.2 seed and face Eleanor Roosevelt in their semi. Defending 4A state champs Springbrook avenged an earlier loss to Montgomery Blair, 37-31, to capture their crown. Unfortunately, the Blue Devils were given the No.4 seed and will square off with the top seed, Bethesda Chevy-Chase, to start the day. BCC defeated Springbrook already this season.

Pictured above: Dunbar is on to the 1A state semifinals 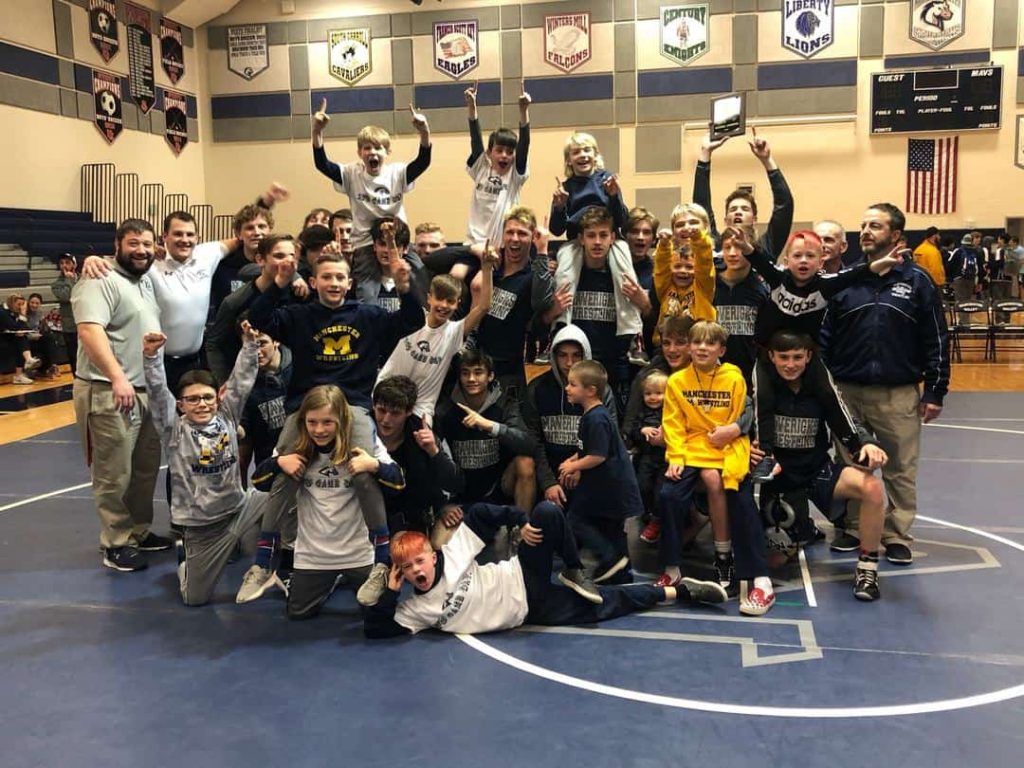