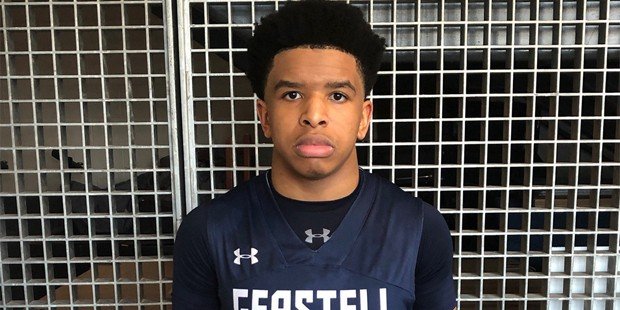 After winning back-to-back MIAA B Conference titles, the Gerstell boys basketball team has struggled during its first season in the super powerful A Conference, getting off to an 0-7 start in league play.

The Falcons, however, improved their record in non-league contest to 6-4, Monday, with a thrilling one-point win on the road at Severn.

After watching Severn rally from behind to hold a one-point lead with one second to play, Gerstell (6-11 overall) pulled out a 48-47 victory with a game-winning tip-in by Jeremiah Stanton.

Stanton, who scored 18 points, and Dayyan Noble, who netted a game-high 19 points lead the way for the Falcons.

Severn (4-9 overall) suffered the heart-breaking loss despite a team-high 18 points from Baylin Groff and 13 points netted by Adam Angwafo.

Pictured above: Gerstell’s Jeremiah Stanton who scored 18 points, including a game-winning tip-in, to life the Falcons to a road win at Severn.