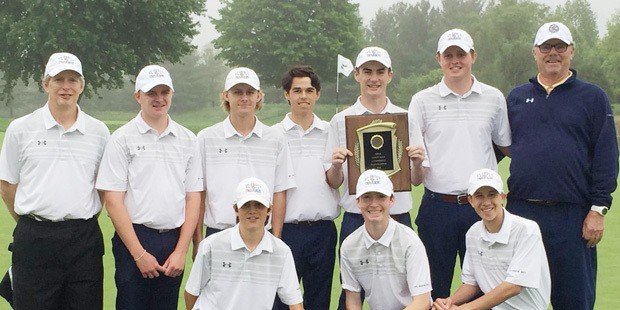 Crusaders defeat Gilman, 15-6, in the rain at Caves Valley

After trading wins against each other at their respective home courses during the regular season, the top two golf teams in the MIAA A Conference – St. Paul’s and Gilman – were set to decide the league championship at a neutral site – the revered Caves Valley Golf Club on Saturday.

Although the weather forecast was foreboding, umbrellas were only needed for a couple of holes and by the end of the day, St. Paul’s was dancing in the rain with a 15-6 victory and a championship.

In the No. 1 spot, junior Lou Baker played flawlessly through 9 holes (7 pars, 2 birdies) for the Crusaders before Gilman’s Mac Webster, nursing a tender wrist, withdrew to yield all three points to Baker.

In the No. 2 spot, junior Brandon Wilson came back from being two down after three holes, against Jairus Gaines, and halved the “front” after he stuck his tee shot on the par 3 6th hole and made birdie. Both Wilson and Gaines finished under par and halved their match overall, and the Crusaders claimed the team point from the foursome.

In the No. 3 spot, yet another junior, Joseph Hudak, ran up against Gilman’s Andrew Fried, who had a hot putter and some escape wizardry Houdini would have been proud of to yield three points to Gilman.

In the No. 4 spot, senior Palmer Foote had all the answers and shots in his match against Evan Gilbert and at even par was able to sweep all three points for St. Paul’s. Again, Hudak and Foote won the team point for St. Paul’s in their foursome.

Championships are often won with defense and in golf that translates to the all-important matches at the No. 5 and No. 6 spots.

At No. 5, freshman TJ Burkom had the buzz saw going full throttle right out of the gate and was up in his match early and never looked back to sweep all three points against Charlie Ratcliffe. At No. 6 spot, sophomore Patrick Rowland steadied his nerves by holing a 40 footer for par to halve the first hole, but narrowly dropped the “front” in his match against Jimmy Swindell. Rowland played 1 under par for the rest of the match and with his 8-foot birdie putt on the 11th hole secured the team victory. Burkom and Rowland also won the team point for St. Paul’s in their foursome.