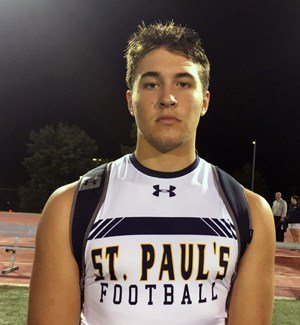 St. Paul’s senior quarterback Leo Kelly passed for 268 yards and 3 TDs in a 27-26 victory over St. Vincent Pallotti on Friday night in Landover.

Because St. Vincent Pallotti’s home football field at Fairland Park was deemed unplayable, the Panthers’ MIAA B Conference opener against St. Paul’s was moved to the Prince George’s Sports and Learning Complex on Friday night in Landover.

The visiting Crusaders didn’t seem to mind the change of venue at all, especially senior quarterback Leo Kelly and his receivers, who burned the Pallotti secondary for enough big plays to escape with a 27-26 victory.

“We didn’t find out until 10 o’clock this morning that they were going to move the game,” St. Paul’s coach Scott Ripley said.

That wasn’t the biggest change about the Panthers, however, that Ripley noticed during the game.

What struck him was how well the team from Laurel played.

“Last year, they had all those Division-I players,” Ripley said. “But this year these guys played like a team. They are really well coached and played hard. I think we might see them again (in the playoffs).”

Although the Crusaders (2-1 overall, 1-0 MIAA B) led by a couple of touchdowns twice, they just couldn’t shake Pallotti (1-3, 0-1 MIAA B) until the final minute when its two-point conversion try was unsuccessful.

“We only have five seniors, so we’re really young,” Pallotti coach Tony Ashley said. “We kept fighting through. Maybe next week (against Boys’ Latin) we’ll keep fighting through and find a way to win.”

St. Paul’s opened the scoring on a 20-yard pass from Kelly to senior Quizzon Tarver midway through the opening period and then went through the air again to reach the end zone on a 71-yard connection from Kelly to junior Alex Sulin to take a 14-0 lead early in the second quarter.

On the play to Sulin, a third-and-six from the Crusaders’ 29-yard-line, Kelly bought time while rolling to his right and finding the junior wideout behind the coverage.

“The play wasn’t supposed to go to me,” Sulin said. “I was just going to tun my man off. But then Leo just made a perfect pass. He’s such a great leader. I think he’s the best QB in the conference.” 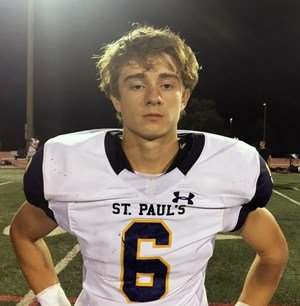 St. Paul’s junior wideout Alex Sulin scored on a 71-yard pass play against St. Vincent Pallotti in a 27-26 win over the Panthers on Friday night.

Pallotti’s passing attack came through a couple of times as well, most notably on a 10-play scoring drive later in the second quarter that featured nine running plays and a 41-yard strike from senior quarterback Khari James to senior wideout Jordan Marshall that set up James’ 1-yard TD plunge to cut St. Paul’s lead to 14-6.

After Kelly found a wide-open Gabe Green on a slant route for a 29-yard touchdown early in the third quarter, Pallotti went airborne as well on a James 40-yard strike to sophomore wideout Isaiah Perkins with 29 seconds left in the period.

James’ conversion pass after a scramble to avoid a sack to senior running back Brockton Wallace reduced the deficit to 21-14.

On St. Paul’s next possession, Kelly and senior wideout Everette McDuffie pulled off a similar play to the one that had gone to Sulin earlier.

Only Kelly had to do a lot more legwork to avoid being thrown for a huge loss before he spied McDuffie open down the field and hit him with deadly accuracy.

The 78-yard gain preceded junior running back Logan Santos’ 2-yard run to pump the Crusaders’ lead to 27-14, less than a minute into the fourth quarter.

“I moved around one guy and stiff-armed another,” said Kelly, who finished with nine completions in 17 attempts for a whopping 268 yards (15.7 yards per completion) with three TDs and one interception. “I looked up and saw Everette with his hand up.”

Pallotti would not quit, scoring on a 1-yard dive by sophomore running back Keshawn Wheeler midway through the final frame and a 17-yard sweep by Emani Alford just over a minute remaining in regulation.

With the deficit at 27-26, Ashley decided to go for the win rather than slug it out in OT.

When James’ pass fell to the turf, the Panthers comeback bid was over.

“My quarterback is still learning,” said Ashly, whose team will travel to north Baltimore to take on Boys’ Latin School – a 27-13 victor over No. 20 John Carroll School Friday in another MIAA B opener – next Saturday. “He played a little bit last year. But he kept his poise and made some big plays for us.”

The Crusaders will host Archbishop Curley on Friday at Tullai Field in Brooklandville.

Panthers go for a late two-point conversion and the win, but the Crusaders hold on, 27-26