St. Paul’s staves off Gilman in a wild one

Both teams make big second half runs, before the Crusaders hold on for a key MIAA A Conference win 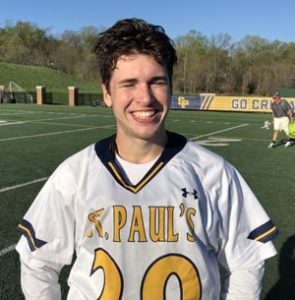 St. Paul’s goalkeeper Jamie Grant made 14 saves including seven in the first quarter to help the Crusaders prevail over Gilman.

In a wild second half, No. 4 St. Paul’s rolled off five straight third quarter goals and appeared to break open a tight game with No. 3 Gilman, Tuesday afternoon in Brooklandville.

Gilman, however, roared back to within one and netted the apparent tying goal, before it was waved off for a crease violation. St. Paul’s took advantage of the miscue to score an extra-man goal and then stretched its lead to 14-9 before surviving another late surge by the Greyhounds and holding on for a key 14-11 MIAA A Conference lacrosse victory.

Gilman trailed 6-4 at the half, but moved within one when Sam King, who had six goals in the contest, scored in the first minute of the third quarter. St. Paul’s, however, countered with a goal by junior Connor Slein and ballooned its lead to 10-4 as Troy Barthelme, Seth Higgins, Logan Santos and Andrew Milani each tickled the twine over the next five minutes.

The Crusaders had little time to savor their handy work as the Greyhounds started their comeback almost immediately. Before the third quarter came to a close, King wrapped two more goals around a score by Jack Tortolani to move within three at 10-7. Will Godine then opened the fourth quarter with a score and King followed with his sixth to make it a one goal game.

“We knew we weren’t going to run away with it,” said St. Paul’s coach Trey Whitty. “That’s a great team, well coached and I thought both teams played their butts off. I didn’t know they’d get back in it that quickly, but we regrouped. Getting into the fourth settled us down a little bit and we’ve got some good seniors. Our huddles were all positive. There were no freak outs. We said, let’s stay the course, we’re good, we’re still winning.’

With 6:55 to play, Dutch Furlong approached the Gilman cage from the left side and fired a diving shot past St. Paul’s keeper Jamie Grant. After a quick conference, however, the officials waved off the score and assessed Furlong a penalty.

St. Paul’s capitalized immediately as Barthelme scored his fourth goal of the game, an extra-man tally, pushing the lead back to two. The Crusaders added goals from Peter Sheehan and Santos and they led 13-9 with 3:42 left. 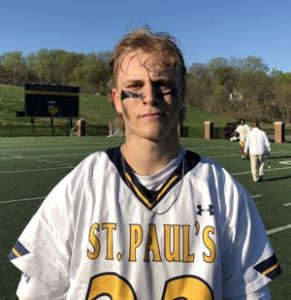 Seth Higgins was one of the three Crusaders with a hat-trick.

Reid said Furlong was forced into the mistake.

“I thought the defenseman played great defense, kept him at a low angle, really forced him so that is the only move he could do,” said the junior. “When you jump in the crease there, you’re going to get the flag, but the great defense forced him there.”

Gilman would not go away and got back-to-back scores from Jack Wyatt to make the score 13-11, still with 2:42 left. St. Paul’s, however, got another goal from Santos and held on for the win.

The win moves St. Paul’s (8-2 overall) to 5-1 in the conference and goes a long to assuring that the Crusaders will secure a place in the A Conference playoffs, which get underway in less than three weeks.

Both teams scored a pair of goals in the first quarter, with St. Paul’s breaking the ice when Barthelme intercepted a clear in front of the cage and scored at the 10:16 mark. The Greyhounds won the ensuing face-off and needed just 16 seconds to get the equalizer from Billy Spilman.

The Greyhounds (7-4 overall, 3-2) applied tons of pressure throughout the remainder of the quarter but Grant was spectacular in the Crusaders’ goal, making seven stops in the opening frame. He finished with 14 for the game.

Following one of those saves, St. Paul’s got out on transition with Santos feeding Milani, at the 8:14 spot, and he put St. Paul’s up 2-1. Gilman got even, however, when King scooped a rebound off the pipe and stuffed home an extra-man goal with just 22.5 seconds left in the quarter.

Gilman took its only lead just 43 second into the second quarter on King’s second score of the game, but Barthelme evened it again with 7:59 left in the half. St. Paul’s went back on top with 2:03 left with a score by Santos, and Seth Higgins sent the Crusaders to the half with a 5-3 lead when he spun and scored, from the right side, with just 9.8 seconds to go.

Barthelme had three assists to go with his four goals, while Higgins and Santos each had three goals while combing for five assists. Milani also had two goals and an assist.

Higgins said both the offense and defense took turns carrying the Crusaders on Tuesday.

“Credit to them. They played a good game, but they responded well with that early run we had in the third quarter,” said Higgins. “They came out and gave us their best shot. It took us a little while to handle it, but we dug deep. Credit to our defense, especially Jamie Grant. He had a lot of big saves today and really saved us at some points. Offense, all week was working on being unselfish, getting to the cage. That third quarter was a good example for us, to get towards the goal and fire some shots towards the keeper.”