St. Paul’s romps over No. 18 Spalding 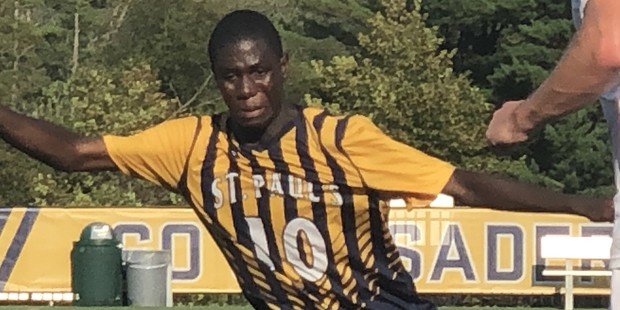 MIAA A Soccer Roundup: No. 3 McDonogh wins big at No. 2 Gilman; No. 5 Calvert Hall and No. 7 Loyola tie; No. 6 Mount St. Joseph routs Catonsville

The St. Paul’s soccer team, which has languished near the bottom of the MIAA A Conference in recent years, came up with a huge performance on its home pitch in Brooklandville, Wednesday, posting a 3-0 win over No. 18 Archbishop Spalding.

The A Conference, which appears to be topsy turvy in 2019 has had several flips already in the young season, including Spalding’s 1-0 win over then No. 1 McDonogh last week. The Cavaliers, however, found themselves on the other end of things Wednesday.

St. Paul’s (1-2-1 overall, 1-1 MIAA A) scored all three of its goals in the second half as Timothy Knott converted a penalty kick and Erik Sagasi netted a pair of unassisted goals. Spalding (2-2 overall) fell to 1-1 in the conference

No. 3 McDonogh, coming off back-to-back losses, played an inspired first half against No. 2 Gilman and built a 3-0 lead against its rival, on the way to a 4-1 rout. Ethan Glaser, Mason Christian and Wyatt Thompson tallied before the intermission for the Eagles.

Gilman (2-1-1, 1-1) cut its deficit to two goals, but Vince Patera iced things for the Eagles (3-2, 2-2) with a late penalty kick score. Thompson added an assist, as did Jacob Murrell, Joel Brown and Bradem Peacock.

The Dons broke on top in the first half when Dominic Caltabiano bent a corner kick inside the far post and Loyola carried the lead until late in the second half. With three minutes to play, however, Calvert Hall got the equalizer when David Peters intercepted an errant clear and driving the ball past Loyola goalkeeper Jordy Eckman.

Finally, No. 6 Mount St. Joseph was on the road for a non-conference game against Catonsville and the Gaels (1-1, 0-1) rolled to a 4-0 win over the Comets.

The MIAA A is divided into two divisions for the first time this fall and parity reigns here in the early going.

In the Black Division, Loyola holds the early lead with four points, followed by No. 4 Archbishop Curley (1-1-1, 1-0), which tied its non-league game with No. 9 C. Milton Wright on Tuesday, and John Carroll (1-2, 1-1), which defeated league newcomer Boys’ Latin, 3-1, also on Tuesday, with three points each. Calvert Hall now has one point and the Lakers (1-2, 0-1) are look for their first result in the conference.

In the Red Division, McDonogh has six points, while Spalding, Gilman and St. Paul’s all have three points. St. Joe, with just one league game played so far, still has zero points.