St. Paul’s School baseball coach Brandon Taylor has announced, on his Twitter feed, that his tenure at the Brooklandville School has come to an end. 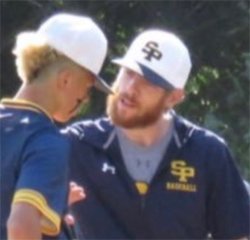 “My time with St. Paul’s is over,” wrote Taylor. “The school has decided to let me go due to a philosophy regarding teacher coaches. I am extremely disappointed and speechless.

“I am very proud of the progress, even more proud of my guys and will cherish the relationships and memories forever.”

As a senior at Westminster High, in 2011, Taylor was a standout on a team which went 23-0 and won the Class 4A state championship. He was 8-0 with a 1.60 ERA that season and started the state final, throwing four no-hit innings. He also went 7-2 as junior as the Owls won two straight Carroll County titles.

He went on two play baseball at East Carolina University. After college, he spent two seasons as an assistant at Westminster and four seasons as a coach with the Putty Hill travel team. He just completed his fourth season at St. Paul’s. The Crusaders had struggled in the MIAA A Conference in recent years, but thrived this spring, their first in the B Conference, going 19-3, including a win in the first game of the tournament finals before falling to Boys’ Latin School in the decisive final game.