Coppin Academy’s Jaden Crawford gets off a shot as St. Paul’s Megan Matsko defends during the second half of Saturday’s final game of the USE Holiday Showdown at Western. The Gators defeated the 20th-ranked Eagles, 63-54.

Because one team unexpectedly dropped out of the inaugural United Strong and Empowered Basketball Holiday Showdown, St. Paul’s School for Girls was limited to a scrimmage on the first night of the 11-team event.

The disappointment from not being able to compete was short-lived, however, when the unranked Gators topped No. 20 Coppin Academy, 63-54, Saturday night at Western High.

Even though the Eagles pounded Joppatowne, 61-31, Friday night, they couldn’t quite catch St. Paul’s (2-3 overall) down the stretch the following evening at the same site.

Sophomore guard Destiny Ryles paced the Interscholastic Athletic Association of Maryland B Conference school with a game-high 24 points by finding her way to the rim early and often while forcing Coppin Academy guards Tyler Galloway and Kayla Henderson into serious foul trouble.

The result was a whopping 35 foul shots for the Gators, who converted on 21 of those tries.

“Testing has a very good basketball I.Q., and she knows how the refs are going to call the games,” St. Paul’s coach Pat Conrad said about Ryles. “And she know when to attack the basket.”

Although Galloway, a senior, and her sophomore backcourt mate Henderson combined to score 41 points, Ryles made sure that neither Eagle star was on the court by the end of the game when the Baltimore City public school was trying to rally.

“We tried to switch defenders on her when Tyler got into foul trouble,” Coppin Academy coach Ulysses Hardy said. “But then Kayla got into found trouble, too. (Ryles) is a great player.”

Trailing, 13-7, after the opening period, St. Paul’s took the lead for good in the second quarter on a stick-back and two free throws by junior forward Devan Conrad and a three-pointer from the top of the arc by senior Sophia Watkinson.

Ryles made sure the gap widened by converting a steal moments after Henderson did the same thing for the Eagles (7-3), and then the St. Paul’s standout buried two free throws before sophomore guard Alex Sawyers netted a pair from the charity stripe to push the Gators’ halftime bulge to 28-22.

When St. Paul’s junior Ava Wax made a jumper to stretch the advantage to 10 points early in the third quarter, it gave the Gators a sizable cushion in  their bid to secure just their second win of the season against three setbacks.

Before it could claim the victory, St. Paul’s had to weather the Eagles’ furious comeback that almost drew them even with just over two minutes remaining in regulation on two Galloway foul-shot conversions.

They would prove to be the last gasp for Coppin Academy, though, because St. Paul’s closed out the victory with an 11-4 run behind Ryles knocking down five of six free throws and going coast-to-coast for a layup, Conrad nailing a clutch jumper from the corner and Sawyers converting twice from the stripe.

All in all, despite not playing on Friday, the USE Showdown proved to be a boost for St. Paul’s and pretty good for the Eagles as well, considering that they start a senior, two sophomores and two freshmen.

“Things didn’t go exactly as we wanted, but this is a good way to prepare for the state playoffs,” Hardy said.

Conrad said the experience should help the Gators.

“Our expectations were to get some very good competition against some bigger, athletic teams,” Pat Conrad said. “We knew we’d really have to use fundamentals — boxing out, making free throws — to do well.”

Ryles said that the Gators kept calm when the Eagles pulled to within two.

“We just had to keep our heads up and pick each other up,” she said. “It was a big accomplishment to beat a (Baltimore) city team like that, so we know that we can go far if we keep playing for each other.” 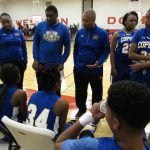 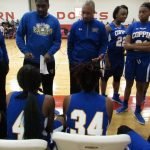 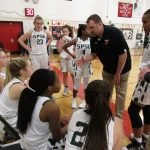