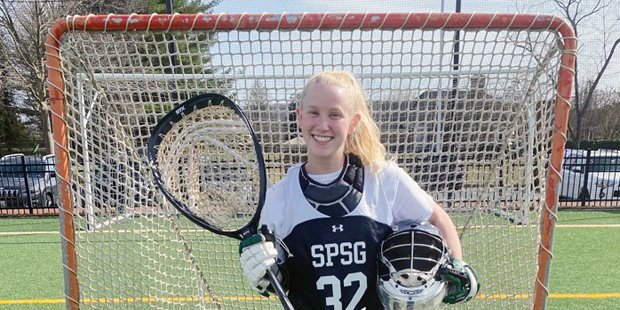 After helping the Gators reach the IAAM A finals as a sophomore, she is a leader on an undefeated team as a senior

Goalie Leah Warehime could not have faced much more pressure as she prepared to start her first game for St. Paul’s School two years ago.

The transfer from Gerstell Academy in Finksburg had expected to back up senior Sophia Foohey, but a month before the season began, Foohey tore an ACL, thrusting the sophomore into the starting spot.

“I was really overwhelmed, because it wasn’t even like, ‘Oh, if I have a bad game, I can get subbed out.’ There was no other goalie on the team,” said Warehime.

“Even though I was new to the school and I was new to the team, that team became a group of my best friends in like three weeks. Having that inclusive mentality really helped me on the field, because I wasn’t as worried as I was at the beginning of the season. The coaches, coach Mary (Gagnon) and coach Melissa (Diepold), helped a lot, because they knew it was an overwhelming position to be in as a sophomore.”

Warehime proved she could handle all the pressure.

She allowed only four opponents to score in double digits, posted a 51 percent save rate and helped St. Paul’s emerge from a .500 regular season to reach the 2019 IAAM A Conference title game. The Gators lost to McDonogh, 5-4, in double overtime in the final, but Warehime’s 11-save performance earned rave reviews.

“She just has a great presence in the goal,” said Megan Huether Nicotra, an All-America goalie at Duke and a gold-medal winner with the U.S. World Cup team who has trained Warehime since middle school.

“When you look at really good goalies, they usually fall into two categories — very technical who make all the saves that they should and they look good doing it, and then those that just are really athletic and kind of sprawl out and make all the crazy saves. I think Leah is unique, because she has both of those.

“She has always been a very technical goalie. She trains hard and she practices the muscle memory constantly, but she also has the ability to — and we saw this in the championship game two years ago — kind of stand on her head and make the kick saves, the athletic saves and come up with the saves people don’t expect her to make,” said Nicotra.

The Gators, who suffered a handful of key injuries across the field in 2019, finished 12-10 with five overtime losses, including four in double overtime. They won two overtime games in the playoffs, edging both Notre Dame Prep and Glenelg Country, 9-8, to reach the final.

For Warehime, the championship game proved typical of the kind of chaotic action on which she feels she thrives. Eleven of the Gators’ 2019 games were decided by two goals or less. In the regular season against McDonogh, the No. 1 ranked team in the country, she had 13 saves in a 7-6 loss, also in double overtime.

“So much of my sophomore year was like straight chaos, all of our games were high-stress situations and we would end up in overtime all the time. I feel like everyone would get so frazzled and kind of nervous that it motivated us all and it motivated me to work as hard as I could to get what I needed to get done,” said Warehime, who earned second-team All-Metro honors from The Baltimore Sun.

This spring, games haven’t been quite so hectic although the season has. After three games, the Gators had to pause their season for two weeks because of a positive COVID test. They quickly got back on the winning track with two wins this week, including Wednesday’s 12-6 victory at Archbishop Spalding.

Heading into Friday’s home game against St. Mary’s, the Gators are 5-0 and winning by an average of 10.6 goals. Warehime, who has not had to play every minute this season, has allowed just 12 goals — an average of 2.4 per game — and has a whopping 70.3 percent save rate.

With several games postponed, most of their toughest competition lies ahead, including McDonogh (9-0) Wednesday and Notre Dame Prep (5-0) on April 30.

Gagnon has no doubt Warehime, who is headed to play for Georgetown next year, will continue to be a calming influence from the cage as the games get closer.

“She doesn’t ever get rattled,” Gagnon said. “She’s really smart and she’s really good on her angles. In practice if we don’t move her and use turn-and-shoot, you’re not going to beat her. You have to move Leah. She’s very consistent. She consistently makes the saves that she should make.”

Senior defender Paris Colgain said it was easy to accept Warehime’s direction and the Gators realized she would be a great teammate immediately.

“As a defender, I think communication is one of the biggest factors in having a successful defense and Leah is always so consistent with being vocal on the field,” Colgain said. “She brings an energy to the field that is able to pick up our team. Whenever the defense, or anyone else on the team, was feeling a little slower or lacking energy, she would be able to vocalize what she wanted us to do to help her and she’s so extremely talented that when the defense would slip up, she was able to get those saves that we really needed her to get.”

Warehime, who followed her older brother Brian into the sport, can’t help but laugh when she remembers her first time in the goal.

She was in third grade when everyone took a turn in the cage and she described her performance as “awful” with “everything flying over my head.” After that game, a 20-minute chat with her coach helped her better understand the position and she stuck with it.

“I kind of like to have control of situations,” she said, “and I feel like that’s something that being a goalie allowed me to have, because you kind of control the defense and you’re the main communicator and you see everything. I feel like, from the goalie standpoint, you can understand almost everything that’s going on on the field and read the situation from where you are. That’s something that I really liked about goalie, the ability to have control when the game can be so chaotic.”