St. Paul’s and Gerstell prevail in B Conference quarters

Reid nets 20 as No. 16 Crusaders eliminate Curley; Harrison, Washington and Rimel power No. 17 Falcons against SJCP

A deep and talented MIAA B Conference playoff field began the post-season Tuesday evening with a pair of quarterfinal games and the winners were No. 16 St. Paul’s, the defending league champs, and No. 17 Gerstell Academy, as both squads advanced to Thursday’s semifinals.

In Brooklandville, St. Paul’s hosted an Archbishop Curley squad which proved to be a challenge for the Crusaders in the regular season, but thanks to big performances from Ziggy Reid, Trayon Wright and AJ Sawyers, the Crusaders were able to string together several big runs to cruise to a 56-33 romp over the Friars.

Offensively, Reid paced St. Paul’s (21-9) with 20 points and 10 rebounds, to go with three assists and a pair of steals. Wright also had a huge night, just missing a double-double with nine points and nine assists. In addition, he added five rebounds and two teals.

Troy Barthelme pitched in with 12 points and five rebounds, while AJ Sawyers provided nine points and the defensive glue.

“We shared the ball extremely well and defended with a ton of energy,” said St. Paul’s coach Seth Goldberg. “We stayed together and played together in all of their runs. Very proud of our guys.”

“Compliments to Phil,” added Goldberg. “He is doing a great job and they had a great season.”

St. Paul’s now enters Thursday’s semifinal showdown at top-ranked Severn (24-5) on an eight game winning streak. The Crusaders’ last loss was on Jan. 26th when they fell at home to Severn, 50-47. Earlier in January, St. Paul’s won, 60-58, at Severn, setting up what should be a heavyweight semifinal battle. 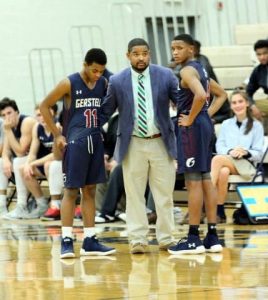 Gerstell coach Ben Thompson has his Falcons poised for a semifinal showdown with Indian Creek and a shot at the MIAA B Conference championship game.

The other semifinal will be as well, when Gerstell visits second-seeded Indian Creek. The final four all went 1-1 against each other, with Severn, Gerstell and Indian Creek all finishing 13-3 in conference play and St. Paul’s coming in just a half game back at 12-4.

SJCP came out inspired and led 10-9 at the end of one quarter, but Gerstell outscored the Vikings 20-10 in the second quarter to take the lead for good.

Eight Falcons contributed to a balanced scoring attack with Ahmad Harrison leading the way with 17 points, followed by 13 points each from Khyle Washington and Colin Rimmel.

Brandon Pilgrim scored a team-high 15 points to lead St. John’s Catholic Prep and Aaron White had a strong night on the glass, finishing with eight rebounds.

Like St. Paul’s, the Falcons will make the trek down I-97 into Anne Arundel County for their semifinal game.

The last time Gerstell visited Indian Creek, it suffered a 20-point loss, all the way back on Dec. 20. The Falcons, however, won the rematch when the Eagles visited Finksburg on Jan. 27, 55-51.

Thursday’s winners will advance to Sunday’s MIAA B Conference Championship Game, which will be played at Harford Community College’s Aberdeen Proving Grounds Federal Credit Union Arena. The title game, which will be part of an MIAA championship game triple-header, is scheduled to tip at 3:15 p.m.