St. Paul’s clinches the top spot in MIAA B 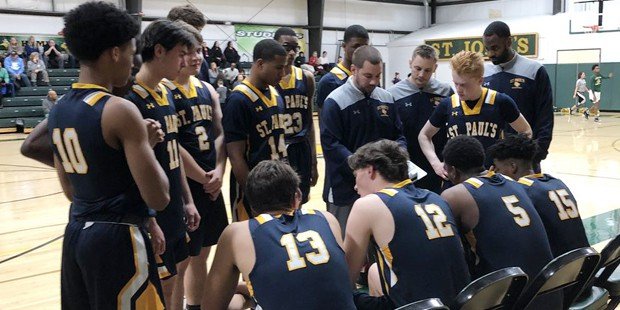 St. Paul’s traveled to Frederick on Wednesday evening looking for a victory to clinch first place in the MIAA B Conference regular season and lock up the top seed for the upcoming league playoffs. The Crusaders needed a buzzer tying hoop, in the final second of the fourth quarter, and overtime, but they came away with a 67-62 victory over the scrappy Vikings.

Trailing by two with 15 seconds remaining in the fourth quarter, the Crusaders (18-7, 13-2 MIAA B) ran their offense through senior Leo Kelly, who made an aggressive drive to the hoop and floated in a tying layup as time expired.

Senior Troy Barthelme dominated throughout the second half and overtime as he scored a career high 29 points with all buy three coming after halftime. Barthelme showed his versatility by knocking down clutch long-range jump shots as well dominating in the post. Senior Ziggy Reid, always a constant for the Crusaders, added 21 points.

Brandon Pilgrim led the Vikings with 19 points and SJCP got 12 points from Brycen Hill and 11 from Tyriel Collings.

St. Paul’s will wrap up its regular season with a B Conference game at Archbishop Curley on Thursday and then will being preparing to host a semifinal playoff game on Feb. 21. Although second place Gerstell Academy (12-3) could still tie the Crusaders in the standings, St. Paul’s won both head-to-head meetings and owns the tie-break.

Gerstell has clinched the second seed will also have a first round playoff bye as it attempts to defend its title.

Curley (9-4) currently owns a slight edge of Severn (10-5) in the battle for third place but both squads have locked up the right to host quarterfinal playoff games.

St. John’s, which hosts Chapelgate Christian in its finale on Friday, can lock up the fifth playoff seed with a win. The Vikings will reach the post-season regardless. The sixth and final seed currently belongs to Indian Creek (6-9), which knocked off Severn on Wednesday. ICS must still defeat Friends (5-10) when the two teams meet in their season finale on Friday.

Friends would pull even in the standings with a victory and that would give the Quakers a season sweep of the Eagles and the tie-break advantage for the sixth playoff seed.

Editor’s Note: An early version of this story incorrectly stated the tie-break scenario between Indian Creek and Friends. VSN regrets this error.