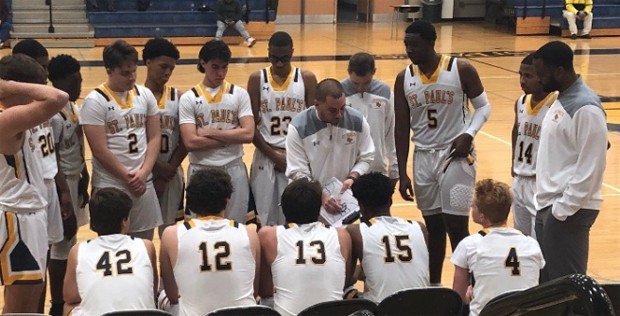 by Derek Toney
After a 4-0 showing last week, St. Paul’s School has earned a spot in the latest VSN Boys Basketball Top 20 poll. The Crusaders, who are tied for first in the MIAA B Conference, debut at No. 16.
Oakland Mills is back in the poll (co-No. 20), thanks to a road victory at Atholton. The defending co-Howard County champions are in a tight race with Atholton, Centennial, Reservoir and Wilde Lake in HoCo.
Mount St. Joseph remains No. 1 followed by St. Frances Academy, Poly, Patterson and Dulaney. The Gaels host sixth-ranked Boys’ Latin School Wednesday evening in a battle of the lone remaining undefeated squads in MIAA A Conference play.
Patterson hosts Poly Tuesday in arguably the most anticipated game of the Baltimore City league season. The winner gains a clear path to next month’s city title game.

This week: at Patterson Mill, Jan. 18