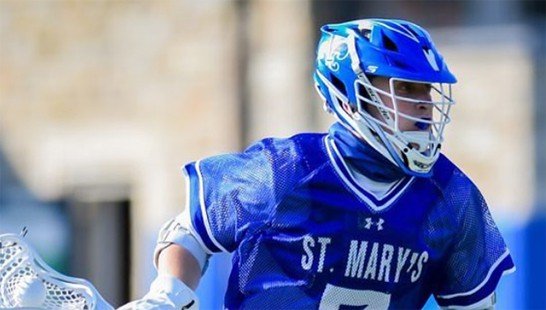 Saints battle back from three early deficits, hold on for 7-6 decision

If you can’t capture the top seed for the MIAA A Conference lacrosse playoffs, the second seed is not a bad consolation prize, as it assures you a spot in the quarterfinals and makes certain you avoid the top seed until the championship game, if you are fortunate enough to get there.

To that end, St. Mary’s tough 7-6 road win over Gilman School in Roland Park, Friday, kept alive the Saints ever so slight chances of claiming the top seed and vaulted them over Archbishop Spalding into second place in the nation’s top conference.

Trailing 4-3 in the second quarter, St. Mary’s (5-1 overall, 5-1 MIAA A) battled from behind to take a 5-4 halftime lead and then scored the first two goals of the third quarter to claim a three goal lead. Gilman finally broke through again with three seconds to play in the third period and scored the only goal of the fourth quarter, to pull within one, but the Saints managed to hang on and post the victory.

The Greyhounds opened the scoring when Clayton Baddley fed Oscar Woloson, but sophomore Nick Golini evened it up for St. Mary’s with an unassisted goal and then scored again, from an assist by fellow sophomore Gavin Burlace to give the Saints their first lead.

The early seesaw continued as Gilman surged back in from with consecutive scores, from freshman James Meyer and Woloson. Up two men, in the second quarter, St. Mary’s drew even again with a score from Owen Barcus, but the Hounds responded with a goal from Tucker Hebert, assisted by Baddley.

Golini buried his second for St. Mary’s and the Saints took the lead for good when senior Will Brimhall cashed in on an assist from junior Will Hopkins.

Leading 5-4 entering the third quarter, Hopkins stretched St. Mary’s lead to 6-4 with an unassisted goal and Dom Rafter cashed in, midway through the third stanza, to make it 7-4.

Late in the third quarter, Hebert gave Gilman a huge boost with his second goal of the game, pulling the Hounds within two heading into the fourth quarter.

The score remained 7-5 in favor of St. Mary’s until Gilman drew a penalty and got an extra-man goal by Charlie Pope, with 2:17 remaining.

Gilman (2-7, 1-6 MIAA A) won the ensuing face-off and ran its offense well enough to get off a quality shot, with just under a minute to play, but the ball ended up in the side of the net where it was gathered by St. Mary’s goalkeeper Wes Schmidt, who had four saves. From there the Saints were able to run out clock and take the win back to Annapolis.

If St. Mary’s is indeed going to win the second seed it will have to earn it. The Saints still have four regular season games to play, including contests with Archbishop Spalding, Boys’ Latin School and Severn School, all of which are within ear shot of second place. The Saints also have a makeup game with St. Paul’s School, which has yet to be rescheduled and may not be, with all league teams qualifying for the playoffs.