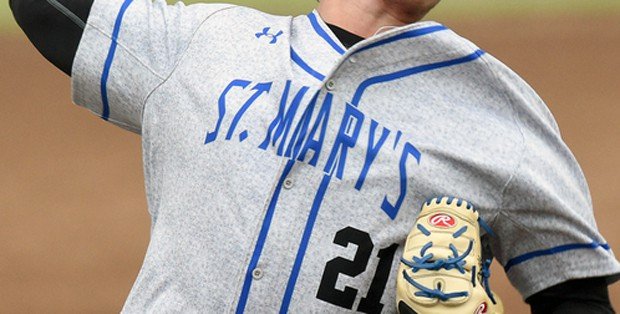 Don’t look now, but the St. Mary’s Saints, winners of four straight, are now in playoff position in the MIAA A Conference baseball standings.

After spotting visiting Gilman a 5-0 lead, St. Mary’s got on the board with four runs in the bottom of the third, added three in the fourth and took the lead with eight runs in the fifth, as they went on to win 17-11.

St. Mary’s (11-9 overall) has improved to 7-6 in the league with its surge over the last week and now sits in fifth place, a half game ahead of Gilman (10-12 overall, 8-8), which holds the sixth and final playoff seed at the moment.

Joe Smoloski had himself a monster day for St. Mary’s, going 4-for-4 with three doubles and five RBI, in addition to drawing a walk and scoring a run.

Alex Slodzinski went 4-for-5 with a run scored and two RBI to lead Gilman. Casey Bishop and Joe Melancon also had two RBI’s each for the Greyhounds, while Bishop, Melancon, Tripp Myers and Max Costes had two hits each.

St. Joe scored two runs in the bottom of the sixth to push past Spalding and keep its playoff hopes alive. Naite Reese scored the tying run for the Gaels when Luke Hess reached base on an error and Hess later scored the winner on a Brad Kenjorski RBI single. Connor Feustle plated St. Joe’s first run with an RBI single in the first.

In Spalding’s two run fourth, Justin Pelletreau delivered an RBI hit and Peter Godrick drove in a run with a fielder’s choice grounder.

Reese was the winning pitcher, going six innings, allowing just two hits and one earned run while striking out six.

Loyola also overcame a 2-1 deficit with a big sixth inning, as the Dons scored three times in frame. Emmet Reynolds and Jeff Snider hit back-to-back triples to lead-off the Loyola sixth to pull the Dons even. Dom Dinoto followed with an RBI single to put Loyola on top and the Dons added an insurance run with a sac fly by Patrick Krack. Chris McDonald drove in Loyola’s first run, in the bottom of the first, with a bases loaded walk.

Calvert Hall scored both of its runs in the third inning on a two-run single by JP Murphy.

In Owings Mills, St. Paul’s scored four times in the first and built a 7-0 lead through three-and-a-half innings. Kevin Madden went 3-for-4 with two runs scored and Alex Sulin was 2-for-3 with a run scored and two RBI. William Sharps, Peter French and Brendan Shelly each had an RBI and Nick Lopez roped a triple and scored a run.

Sharps and Madden combined on the victory on the hill for St. Paul’s. Sharps pitched four innings, allowing two hits and both McDonogh runs to get the win. Madden was dominant in his three innings of work, striking out seven, allowing no hits and walking just one.

With one week to play in the regular season, Curley and John Carroll will continue to battle for fist place and the top seed, but both teams have clinched a top two seed and first round bye in the playoffs.

Despite its loss to Loyola, Calvert Hall still has the edge in the chase for third place with its 10-6 record. However, Loyola and St. Mary’s each have a mathematic chance of moving up to third.

Spalding has four games left to fight its way back into a playoff position and St. Joe, which has three games, needs to win out and gets some help to make the leap from eighth to sixth.