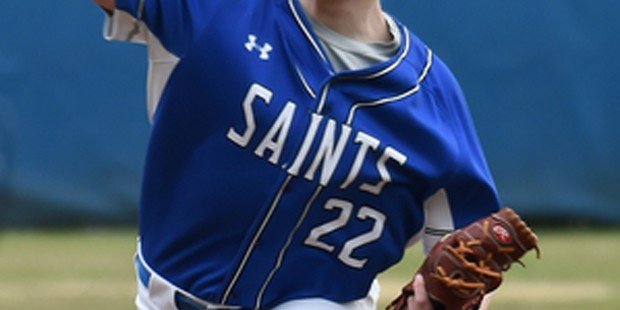 Kenealy sparks Saints with three hits and pair of RBI’s

Monday’s MIAA A Conference baseball game in Owings Mills between St. Mary’s and host McDonogh School was scoreless through four innings, before the visiting Saints scored nine times over the final three innings to claim a 9-2 MIAA A Conference victory.

Damion Kenealy led a 10-hit St. Mary’s attack by going 3-for-3 with two RBI’s and two runs scored, including a two-run double in the Saints’ decisive five-run sixth inning.

Ryan Merkel broke the ice for St. Mary’s with a RBI triple and later scored on a wild pitch in the Saints’ three-run fifth. Also in the fifth, Logan Scully hit an RBI triple as well. Rocco Abdinoor contributed a two-run double in the St. Mary’s sixth and Scully (3-for-4) added his second RBI with single to cap the sixth-inning scoring.

In the top of the seventh, the Saints added their final run with an RBI double off the bat of Henry Carbone. It was St. Mary’s fourth extra-base hit of the afternoon.

McDonogh also scored in the home half of the fifth as Evan Marcinko delivered a sacrifice fly. Marcinko also plated the Eagles’ second run with an RBI ground out. McDonogh had just two hits in the ballgame, with two coming from Sam Kinney, who had a double and a single in three trips.

Luke Bessette made the start for St. Mary’s and pitched three scoreless innings, before Michael Coit tossed the final four frames and earned the win.