St. Mary’s keeps flying high in the MIAA B 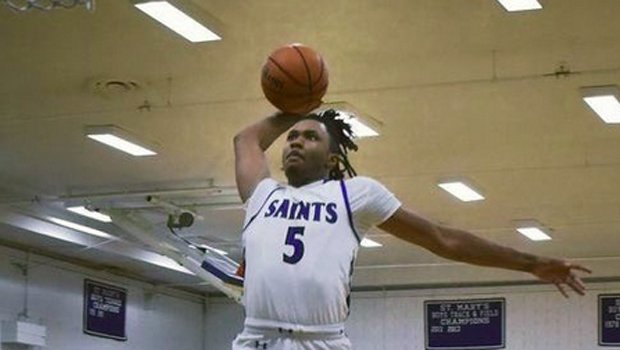 No. 15 St. Mary’s stayed undefeated in MIAA B Conference league play, Wednesday, as the Saints routed rival Severn, 66-46, in Annapolis.

The Saints (13-7 overall) broke open the contest in the second quarter when they outscored the visiting Admirals 18-8. They stretched their lead by seven after three quarters as they took a commanding 54-33 lead into the final stanza.

As he has done most of the season, Jacob Aryee led the st. Mary’s offense, scoring a game-high 22 points. He completed a double-double with 11 rebounds and added 3 assists and 3 steals.

Aidan Harris just missed a double-double as he scored 14 points and collected 9 rebounds, while Peyton Mason and Connor Harris combined for 16 points.

Pictured above: St. Mary’s Jacob Aryee, who scored 22 points, flies towards a one-handed hame in the Saints’ 66-46 win over Severn on Wednesday.

At home in Frederick for just the second time this season, St. John’s Catholic Prep turned in a stingy defensive outing as it defeated visiting St. Paul’s, 57-49, in MIAA B Conference basketball action.

Macahi Nelson, who has been a scoring spree of late, netted 26 points to lead the Vikings. Dorian Tema added 17 points and David Giandrea netted 10 for the winners.

St. John’s (5-5 overall) is now 3-2 in the B Conference where it is currently in third place, behind St. Mary’s, who the Vikings will host on Friday, and Chapelgate Christian (5-2), which the SJCP defeated on Monday.

St. Paul’s slipped to 6-8 overall and 3-3 in the league. The Crusaders are tied for fourth place with Indian Creek, Archbishop Curley and Severn.

Curley, which has won four straight MIAA B Conference games, since starting its league schedule at 0-4, got a buzzer beating three pointer at the end of regulation, forcing overtime, before outscoring the visiting Falcons by 10 in overtime.