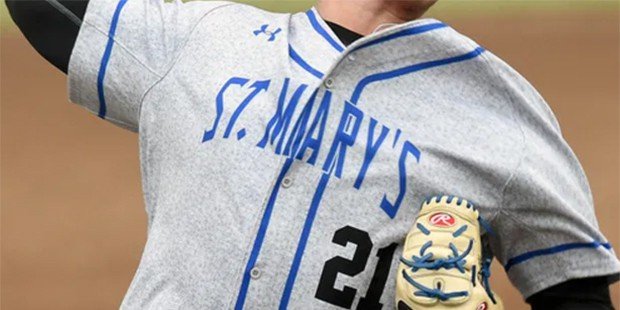 It’s been a tough spring for the St. Mary’s baseball team, as several close early season setbacks snowballed into nine losses in their last 10 games heading into a rainy appearance at Calvert Hall College on Friday.

The Saints, however, got some outstanding pitching and showed they could be dangerous in the postseason, as they blanked the Cardinals on four hits in a 2-0 victory, spoiling Calvert Hall’s Senior Day.

Eric Chaney and Ryan Merkel each drove in one run in St. Mary’s first at bat and neither team scored the rest of the way.

Michael Coit made the start for the Saints (5-11 overall, 4-11 MIAA A) and tossed two scoreless innings. He was followed to the bump by Nick Pasta, who three four innings and collected six strikeouts to earn the win. Damion Kenealy then finished things off with a scoreless seventh.

St. Mary’s only managed two hits in the game, as Scott Borgman made the start for Calvert Hall. He worked six strong innings, allowing the two runs, on two hits with eight strike outs and four walks.

Calvert Hall (12-7 overall), which earned coach Lou Eckerl’s 500th career win in its last outing, fell to sixth-place (8-7) in the MIAA A Conference.  The Cardinals close their regular season Tuesday at home against John Carroll School.