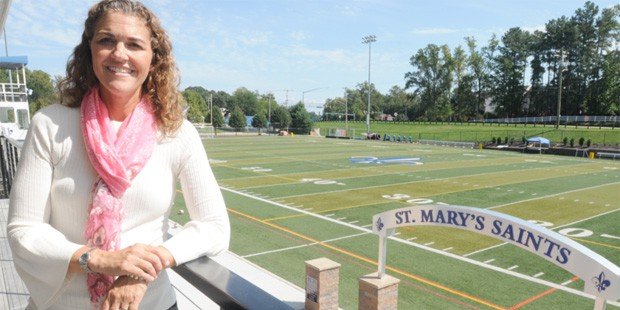 Fondale was honored, along with Northwest High School AD Anne Rossiter, for making a “significant impact on the lives of students and using athletics to achieve progress in the social and cultural environments of their school and community.”

Since the award’s inception in 1978 only two previous winners served at Catholic Schools.

In announcing the award in a press release, St. Mary’s Principal Mindi Imes said, “Allison Fondale is a servant leader who guides her team to make St. Mary’s and Annapolis a better place. Allison is a leader who builds a team and, because she is a self motivated professional, her team seeks to emulate her example.”

Prior to arriving at the Annapolis school, Fondale coached women’s lacrosse at Navy, Ohio, Maryland and Duke. At Howard County’s Atholton High School she was a three-sport star, playing soccer, basketball and lacrosse, before going on to become a two-time All-American for the Loyola University in Maryland women’s lacrosse team. Later, she was inducted into the Greater Baltimore Chapter of the US Lacrosse Hall of Fame and, in 2019, MSADA honored her as the Interscholastic Athletic Association of Maryland (IAAM) Athletic Director of the Year.

“I am honored to receive the MSADA Athletic Director of the Year Award,” said Fondale. “This award is reflective of the hard work, dedication and commitment of our St. Mary’s coaches, staff and administration. Principal Mindi Imes had a vision for our athletic department seven years ago and her support has enabled our department to hire and retain great coaches and implement programs that are unique to St. Mary’s, which have had a positive impact on the athletic careers of our student athletes.”

In addition to Fondale’s award, MSADA honored her administrative assistant Patricia “Patty” Gateau with its 2020 Distinguished Service Award. The award is presented to individuals outside the field of athletic administration in recognition of their length of service, special accomplishments and contributions to interscholastic sports.

Gateau has served at St. Mary’s for more than two decades and was the school’s first athlete administrative assistant.

“This award is about service and Patty has dedicated her life to service,” said Fondale. “Patty is highly respected by all she works with, whether at St. Mary’s or at an opposing school. She is a true servant leader, dedicated to others and strives to make St. Mary’s and those around her to be the best they can be.”