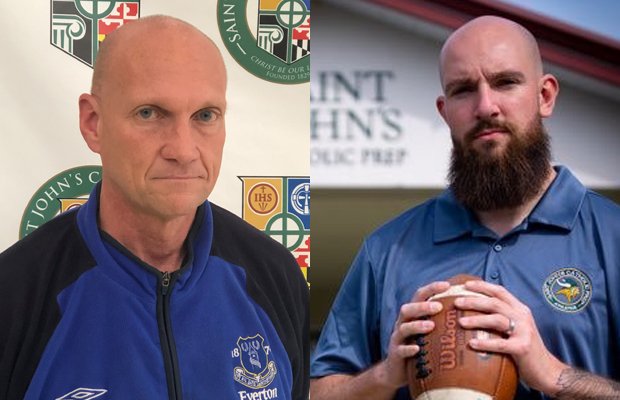 In the fall at St. John’s Catholic Prep two new head coaches will be roaming the sidelines for the Vikings as the school recently announced the hiring of Tony Howard to lead its boys soccer program and Nate Marr as its new head football coach.

Howard comes to Buckeystown with more than 35 years of professional soccer coaching experience with United States Soccer Federation and the National Soccer Coaches Association of America. He is especially skilled at developing goalkeepers which has done in the US National Team system, as well as on the professional and college levels.

“Coach Howard did a fantastic job in the interview process of showing his knowledge and excitement for the game of soccer,” said Saint John’s Catholic Prep Athletic Director Stu Wilson. “He has played and coached at every level imaginable in the game.”

“I am excited to start working with the boys at SJCP as well as get our name out to the soccer community to grow our program,” said Howard. “I believe that the location of the school, its Catholic values, and the energy/experience I bring will all lead to an increase in the number of players, and hard work from our players will increase the level of success on the field.

“I want to thank the administration at SJCP (Will Knotek, the head of school & Stu Wilson, AD) for the opportunity to guide the program.”

Marr, who will also join the school as a physical education teacher, comes to the Vikings after stints as an assistant at Concordia Prep, as well as on the college level at McDaniel College. He also worked as a student assistant coach with the West Virginia University football team.

“We are very excited about Nate’s future with SJCP,” said Wilson. “We were impressed with his organization, knowledge, passion, energy and enthusiasm for football. His knowledge of the game and his ability to relate to the players should prove to be a great fit for developing the program here at SJCP.”

The new coach is set to hit the ground running.

“It is an honor to be named the next Head Football Coach at Saint John’s Catholic Prep,” said Marr. “I would like to thank our Head of School, Mr. Will Knotek, for extending me the opportunity to join the ranks of such a prestigious college preparatory school. I would also like to thank our Athletic Director, Mr. Stu Wilson, for believing in me and my vision for the future of the football program. My wife Kate and I could not be more excited to be joining the Saint John’s Catholic Prep community. I look forward to leading SJCP into a new era of Viking football. We are going to build a program this school and community can be proud of and strive for excellence in everything that we do. Our pursuit of the MIAA varsity football C Conference Championship starts now.”