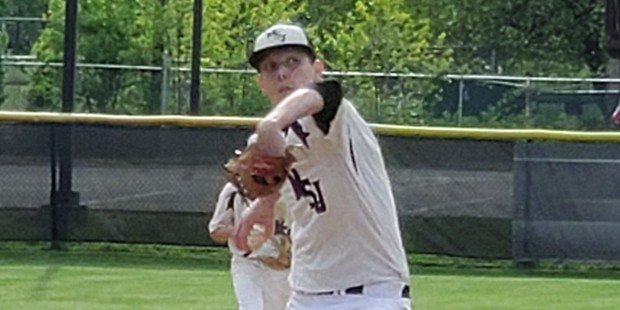 In a game that was scoreless through 5-1/2 innings, Mount St. Joseph broke on top with a single run in the sixth and got a walk-off win, against visiting Archbishop Curley, with another run in the home half of the seventh to prevail, 2-1, in MIAA A Conference baseball action on Thursday. 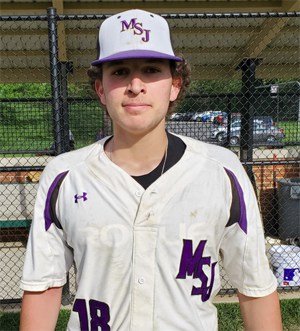 Landon Cooley plated the winning run with a walk-off single in the bottom of the seventh inning.

Landon Cooley delivered the game-winning RBI, after Curley scored its only run of the contest in the top of the seventh to avoid a 1-0 loss.

It was another classic A Conference pitchers’ duel between St. Joe’s Patrick Bauer and Curley’s Ryan Edmonds. Bauer three a complete-game 5-hitter, fanning six and walking two to get the win, after Edmonds had bested him in a match-up at Curley a couple of weeks back.

Edmonds, who no-hit McDonogh last week, matched Bauer pitch for pitch, over the first five, but the Gaels grabbed 1-0 lead in the bottom of the sixth on an RBI double from Ethan Grieb, down the third base line, plating shortstop Zach Waino. Waino drew a walk on a 3-2 pitch to start the frame and he moved to second on a sac-bunt by Josh Lantz.

The Friars’ answer started when Kobe Davis drew a one-out walk on a 3-2 pitch, and he moved to third on double to deep center off the bat of Cam Munk. John Petryszak then drove in Davis with the tying run in on a sac fly to right.

Bauer got Ryan Torres to ground to first to end the threat.

Mike Sweeney singled to start the seventh for the Mount. Speedy Nick Strouse, who ran for Sweeney, advanced to second when Will Gunderson grounded out, and promptly stole third, setting the stage for Cooley’s heroics.

Cooley knew the importance of his at bat in the home half of the 7th, when Coach Phil Kraska sent him up to hit for CaMaury Arrington with the winning run on third.

“I felt confident walking up there, said Cooley. “He [Edmunds[ was letting up on his fast-ball a little, and I got into a good count. I saw one right over the middle and I did what I had to do. This was a real big game for us.”

“This was a huge win. They got us the first time we played them on a walk-off, and we need this momentum going into the playoffs.”

Kraska praised Bauer, and tipped his cap to Curley’s Edmonds.

“Patrick really wanted this game,” said Kraska. “He’s been looking forward to it since last week. He made quality pitches when he had to, and he was able to dominate.”

On Edmonds, he added, “He’s a tough competitor and he threw a heck of a ballgame, just like last time. Curley is a real tough team to beat.”

Bauer said it was a great team win. “Getting two runs off of [Edmunds] is really great. Our defense was great, and I peppered fast-balls away to hold them to one run.”

The two teams entered the contest tied for third-place in the conference and the Gaels have now moved into a tie for second with Gilman, both at 10-5 in league play. The Gaels (13-5 overall) are officially red-hot, having won five straight. To claim the second seed they will have to beat McDonogh in their regular season finale on Tuesday and have Gilman lose when it hosts Curley on Tuesday. The Greyhounds swept their two games with St. Joe and hold the tie-breaker.

Kraska said his recent streak is important as it is building momentum for the post-season.

“Guys are getting more confident at the plate, and we’re getting hot when we need to with the playoffs coming up,” he said.

Curley has not allowed an opponent to score more than two runs in each of its last six games, yet the Friars have lost four of them, including two straight to drop into fourth place.
.
“I can’t ask for more from my pitching staff,” said Curley coach Joe Gaeta. “They are top notch. Edmonds continues to pitch well every time, we’ve just got to help him out. Were not doing anything at the plate. We just did not get the job done today.”

Pictured above: St. Joe’s lengthy right-hander Patrick Bauer avenged an earlier loss to Curley by defeating the Friars, 2-1, in Irvington on Thursday.