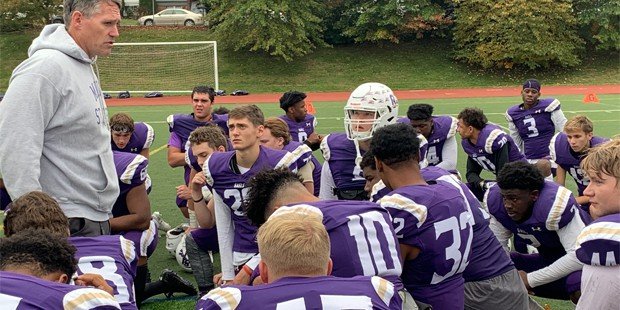 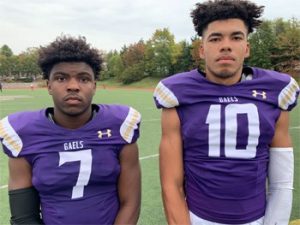 No. 6 Franklin High paid a visit to Irvington, Saturday afternoon, for a rare late season non-conference battle with No. 3 Mount St. Joseph, and the public vs. private gridiron battle turned out to be an entertaining and competitive affair.
When the dust settled, Mount St. Joseph junior quarterback Billy Atkins had thrown for four touchdowns and senior teammate Marlowe Wax rushed for 152 yards as the host Gaels held off the scrappy Indians, 35-23.
St. Joe (7-2) started fast going 65 yards in five plays on the first possession of the game, scoring on a beautiful 34-yard pass to junior wide-out Tyler Wilkins, who split of pair of Franklin defenders near the goal line as he hauled in the throw and darted into the end zone.
It was the first of four touchdown passes for Atkins, who went 19-of-34 for 340 yards.
Franklin (6-2), however, battled back to score the next 10 points and take the lead.
After punting on their first two possessions, the Indians got a short field to work with, thanks to an interception and a 57-yard return by junior Demonn Frazier, who gave Franklin a first-and-goal at the MSJ six. Two short runs by Jonathan Smith setup a 2-yard touchdown run by quarterback Vernon Brown and the game was tied, 7-7, with 4:06 to play in the opening quarter.
Then after halting a long St. Joe drive with a turnover on downs at their own five, the Indians drove to the Gaels’ 19, sparked by a 57-yard run by senior Ahmad Mosley, and Franklin cashed in with a 35-yard field goal by Simon Spath.
The lead lasted but a moment and St. Joe took the lead for good on a 5-yard touchdown run by Wax, capping a 12-pay, 58-yard drive. Wax, the Gaels all-time leading rusher, added 152 yards to his record on 28 carries.
St. Joe then appeared to bust the game open, as Atkins found senior wide-out Dont’e Thornton on a short slant and Thornton, after stepping out of a tackle, was gone in a flash, racing for a 75-yard score and a 21-10 lead at the half.
Franklin battled back for a field goal try on the final play of the second quarter, but it was blocked. Still, the Indians did not go away.
Jhavon Reames nearly broke the opening kick of the second half, setting the Indians up at the St. Joe 49. Eight plays later, Brown had his second rushing touchdown of the game and the Indians were back in it at 21-16.
“Franklin is very tough,” said St. Joe coach Rich Holzer. “We thought we were ready to put the game away a couple of times and they bounced back, and we then had to answer. That’s how it went all day. They are a championship team and are never going to give up.”
Neither did the Gaels.
Atkins responded on the following possession with an 18-yard touchdown pass to Ausar Crawley and the score was 28-16 after three. Franklin made it a one score game once again as it opened the fourth quarter with a 77-yard touchdown drive with a 3-yard touchdown pass from Brown to Rodney Nelson.
The Gaels, however, finally got the game under control with an a 18-yard TD connection between Atkins and Crawley, with 5:08 left, to set the final score
Crawley, who had eight catches for 99 yards, believes his squad was well prepared.
“We already knew what coverages they were going to play because we got the same thing last week and we didn’t execute it,” said Crawley, who finished with eight grabs for 99 yards. “As a wide receiver group we knew we had to win our battles and he was going to find us.”
According to Franklin coach Anthony Burgos, the game was excellent preparation for his team’s post-season aspirations.
“We just want to test our guys every week and I thought when this opportunity came up late in the season, I think this would be a good test to see how we compare from week one,” said Burgos.
Burgos also felt his team was within one play of changing the outcome on a few different occasions.
“We were constantly chasing points,” he said. “We were just one key stop away from maybe changing the game and giving ourselves an opportunity. I thought we had opportunities to maybe cut it to a seven point game with the three minutes left. We were looking to be in the game in the fourth quarter and try and see if we could come away with it.”
Thornton finished with five catches for 125 yards.
For Franklin, Brown was 19-of-135 for 170 yards. Reames ran 10 times for 111 yards and senior Alex Jones had five receptions for 96 yards.
NO. 3 MOUNT ST. JOSEPH 35, NO. 6 FRANKLIN 23
FRAN 7 3 6 7 — 23
MSJ 7 14 7 7 — 35
1ST QUARTER
MSJ – Tyler Wilkins 3 pass from Billy Atkins (Scott Martin Kick)
F – Vernon Brown 2 run (Simon Spath Kick)
2ND QUARTER
F – Simon Spath 35 field goal
MSJ – Marlowe Wax 5 run (Martin Kick)
MSJ – Dont’e Thornton 75 pass from Atkins (Martin Kick)
3RD QUARTER
F – Vernon Brown 1 run (Conv Failed)
MSJ – Ausar Crawley 17 pass from Atkins (Martin Kick)
4TH QUARTER
F – Corey Crawford 3 pass from Vernon Brown (Spath Kick)
MSJ – Ausar Crawley 19 pass from Atkins (Martin Kick)