St. Joe and St. Frances will battle for BCL crown

Fourth-ranked St. Joe, which has won this tournament seven times, including four times in the last six years, reached the title game with a 54-51 win over a stubborn Goretti squad.

The game was tight throughout and in doubt to the very end. St. Joe (30-5), however, had just a little more juice than Goretti (29-8) as it got over the hump behind a combined 44 points from senior Jalen Smith and James Bishop.

Smith, the McDonald’s All-American, turned in another outstanding performance, scoring a game-high 23 points, as his future college coach, the University of Maryland’s Mark Turjon watched court-side.

The game was tied after one quarter and MSJ led by just three at the half. St. Joe built some breathing room in the third quarter, but Goretti rallied several times to get within one possession before the Mount was able to close out the win at the free throw line in the final minutes.

“It means a lot to be to playing in another championship game in my senior year,” said Smith. “I really want to go out with another championship. I was a little out of my rhythm tonight and out of my game because Goretti pretty much played a zone the whole game but we were able to adjust. It was a real good win and a real good confidence booster going into tomorrow.”

Bishop added, “We’ve got to come out strong tomorrow and be ready to play. It took a little while to get adjusted to these baskets but we came out okay but we came out on top. We played good defense tonight and we had to slow RJ (Blakney) down, and that was the key to the win.”

Goretti, which learned this week that it received a bid to the Alhambra Tournament along with St. Joe and St. Frances, was led by 17 points from Abdou Tsimbila and 16 from RJ Blakney. The Hagerstown Gaels will return to action Thursday against DeMatha in the Alhambra quarterfinals.

The nightcap between top-ranked and recently crowned MIAA A Conference champion John Carroll and No. 3 St. Frances did not develop in the battle everyone thought it might be.

St. Frances came out on fire in the opening quarter, building a 20-5 lead, creating a huge uphill climb for the Patriots. John Carroll fought back to within nine points midway through the fourth quarter, but St. Frances got hot again and won going away, 70-53, to punch its ticket into the final. The Panthers will be looking for their seventh BCL crown on Sunday.

John Carroll (34-5) played outstanding team defense in building their early advantage and got a balanced offensive effort, as three scored in double-figures and seven scored seven or more points.

Junior guard Rajeir Jones was the top point man with 16, followed by 12 from post Karon Moore and 11 from senior guard Elijah Epps. 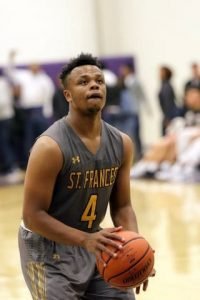 Elijah Epps scored seven points in a big first quarter run by St. Frances and finished with 11 as his Panthers cruised past No. 1 John Carroll and into the BCL championship game.

Seven of Epps’ points came in the critical opening surge by St. Frances.

“We’ve been practicing real hard ever since the loss to Boys’ Latin (in the MIAA A Conference semifinals) and we came back as a team tonight. I’m proud of our team-band for the effort. We knew after that big first quarter the John Carroll would make a run and we just stayed together played as a team and got the win.”

St. Frances head coach Nick Myles expressed how special it is to play in the BCL championship.

“I grew up watching the Catholic League and it’ will be another great experience to be able to play in the championship game,” said Myles. “Our motto all year was to continue to play as a team. We don’t do it with just one guy we do it with 11 guys.”

Playing in his final high school game for John Carroll, McDonald’s All-American Immanuel Quickley scored a team-high 18 points, but he was well defended most of the night and scored most of his points after St. Frances had built its early advantage.

The Patriots (30-8) also got 10 points from senior Montez Mathis and nine from junior Yavuz Gultekin.