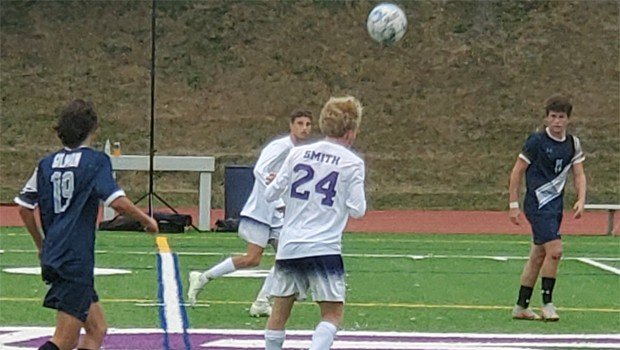 Two St. Martin first half goals spur the Gaels to a Homecoming win

After fielding one of the best boys soccer teams in the country during the COVID-19-shortened 2020 season, Mount St. Joseph has found itself in a rebuilding mode as they have struggled to an uncharacteristic losing season in Irvington this fall.

Mount St. Joseph soccer coach Mike St. Martin got his 265th career win on Saturday against Gilman, thanks in part to two goals by his son Brian.

On a beautiful Homecoming Saturday morning, however, the Gaels played inspired soccer in a 4-2 win over No. 14 Gilman that dealt a body blow to the Greyhounds chances of reaching the MIAA A Conference playoffs.

Senior Brian St. Martin, a University of Maryland commit and the son of head coach Mike St. Martin, scored a pair of first half goals to spark St. Joe. The Gaels then matched a two-goal second half surge by Gilman to complete the victory. It was the 265th career win for the elder St. Martin, who is completing his 25th season at the Mount.

Brain St. Martin, who is just rounding into form after missing much of the season as he recovered from an off-season injury, struck in the first two minutes of the contest on a nifty pass from Shaun Chung. Six minutes later, he converted a penalty kick after a Gilman foul in the box.

“I tried to get us off to a fast start,” said Brian St. Martin. “The ball came in from Shaun, a good ball, and I was able to get the goal.

“On the penalty kick. I had a lot of confidence. We knew Gilman’s situation, one spot out of the playoffs, coming in, and after they got us 1-0 at their place earlier in the season, this win gave us revenge.”

“We were unlucky when things were not going our way. We’ve been in every game.”

Braedan Smith made it 4-1, a few minutes later, to secure to win. The Hounds got a header from Ryan Capadanno with 10 minutes to go in regulation, but it was not enough.

Gilman Coach Jon Seal summed up the result simply. “They were better than we were today. The best team today, won.”

Gilman (9-9 overall) fell to 8-9 in A Conference play and remains two points behind Concordia Prep in the battle for the final playoff spot. The Greyhounds, who have lost three of four since their epic 1-0 win over then No. 1 Calvert Hall, do have three games left, all at home, but the road is tough. They play No. 1 McDonogh on Monday and No. 7 John Carroll on Wednesday, before closing with St. Paul’s on Friday.

Concordia (8-8-2) has just two games left, at St. Paul’s on Monday and at Archbishop Spalding on Wednesday. If the Saints win one of those games, Gilman would need two wins to reach the post-season. If Concordia wins each of its final two games, the Greyhound would need a three game sweep this week to keep playing in 2021.

St. Joe (4-11-3) will look to carry the momentum from this win into its final two games, vs. Loyola at Meadowood Regional Park on Monday and at Boys’ Latin on Wednesday.