It was a blast from the past on Super Bowl Sunday as Baltimore Catholic League basketball, once a staple on Sundays for decades during the winter season, was on display with two matches. St. Frances Academy and St. Maria Goretti continued its front-runner status with victories.

Goretti led wire-to-wire, completing a regular season sweep of St. Joe (19-6, 8-3 BCL), which entered the weekend in tied for first. Now, the Gaels are third after Sunday’s result and Friday’s loss to Loyola Blakefield (6-5 BCL), which hadn’t beat the Irvington school in the previous 22 meetings.

Senior guard James Bishop posted a game-high 30 points for Mount St. Joseph. The LSU commit poured in 20 in the third quarter as the Gaels cut a 15-point deficit to six.

Blakney, a 6-foot-5 wing whose mother, Dafne Blakney (nee Lee) was an All-Met standout at Walbrook in the late 1980s before starring at the University of Maryland, blocked a Bishop 3-point attempt and dropped a dagger of his own on the other end, starting a run that regain control for Goretti.

Rashaan Edwards finished with 10 points for Goretti, which sits second behind St. Frances in the BCL standings. The Panthers improved to 24-4 overall with a 64-52 victory over Mount Carmel in a BCL/MIAA A match inside Phelps Gym in East Baltimore.

The Panthers built a 39-26 halftime advantage, completing a regular season sweep. St. Frances played most of the second half without junior point guard and last season’s BCL Tournament MVP Adrian Baldwin, who suffered an eye injury. 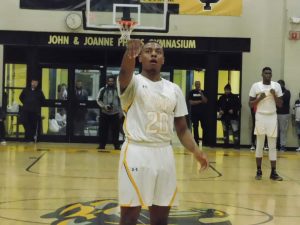