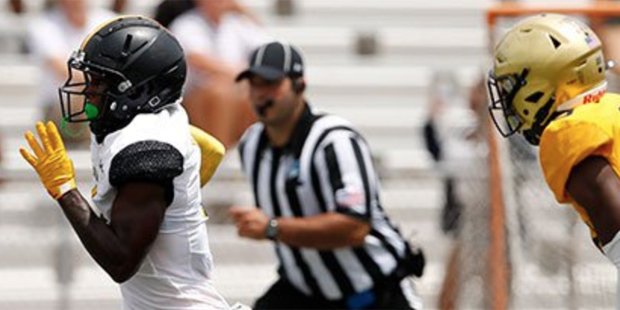 Panthers turn the ball over five times in loss to St. Thomas Aquinas

St. Frances football, ranked No. 8 in the nation, opened its 2021 season on the road in Miami, Saturday, against another national power, No. 6 St. Thomas Aquinas, in a game televised nationally by ESPN. Although the Panthers had their moments, they were unable to overcome five turnovers in a 38-23 loss to the host Raiders.
Aquinas jumped out to a 14-0 first quarter lead, as it recovered a St. Frances fumble in the end zone and the second Panther turnover also led to a TD for the Raiders. Aquinas, however, was also bit by the turnover bug as an interception and fumble recovery allowed St. Frances to score pair of touchdowns in the final two minutes of the opening quarter to tie the contest.
The first Panther score came on a 2-yard run by Darrien Lewis and the second touchdown came on a 28-yard, fourth down throw from quarterback John Griffith to Lamar Patterson.
After Aquinas regained the lead with a field goal, in the second quarter, St. Frances took its only lead of the game, at 20-17, on an 8-yard touchdown run by Terron Kellman, late in the second quarter. St. Frances appeared poised to hold that lead going into half, but Aquinas quarterback Zion Turner led a brilliant two-minute drive, escaping a near certain sack to complete a 38-yard touchdown pass to Jaylan Sanchez on the final play of the half, pushing the Raiders back in front, 24-20.
Turner, who passed for 298-yards, rushed for two scores and threw for one, led the Raiders on another TD drive in the third quarter, which stretched their lead to 31-20.
St. Frances had a golden opportunity to cut into its deficit, with four minutes to go in the third, but fumbled the ball back to Aquinas after driving to the one-yard line. A fumble recovery by the Panthers, late in the third quarter, produced a field goal for St. Frances’ Andre Jandayan, with 7:37 to play, pulling them back within eight. However, Aquinas held the ball for more than five minutes before scoring the game-clinching score.
Pictured above: St. Frances’ Lamar Patterson runs into open space against St. Thomas Aquinas on Saturday in Miami, as the Panthers lost their season opener.