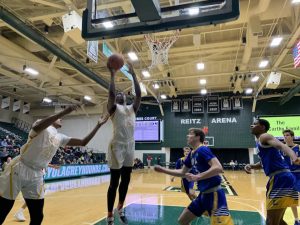 St. Frances’ Jason Murphy prepares to put the ball up during the first half of Friday’s Baltimore Catholic League Tournament semifinal match with Loyola. The No. 3 Panthers advanced to their second straight final with a 63-42 decision over the 11th-ranked Dons at Loyola University’s Reitz Arena.

History will be on the table for the 48th Baltimore Catholic League Tournament championship as St. Frances Academy and St. Maria Goretti advanced to the final with semifinal victories Friday evening at Loyola University’s Reitz Arena.

Goretti secured its first BCL finale since 2002 with a 64-54 victory over fifth-ranked Mount St. Joseph in the nightcap. No. 3 St. Frances Academy is on the verge of a rare sweep, thanks to a 63-42 decision over 11th-ranked Loyola Blakefield.

The top-seeded Panthers led wire-to-wire, completing a season sweep of the Dons. Jordan Toles led all scorers with 17 points for St. Frances.

Leading 27-20 at half, the recently crowned MIAA A Conference champs pulled away in the second half to improve to an area-best 35-5. Junior forward Jamal West finished with 16 points, nine rebounds, one assist and one block, and Chicago State University recruit Rajier Jones had 16.

The East Baltimore school is 32 minutes away from retaining the Brother D. John Smith Trophy, to go with the MIAA A Conference title it won last weekend at Harford Community College.

“It’s been 10 years since we won both [the MIAA and the BCL], and that is the goal,” said St. Frances coach Nick Myles.

Myles said he told his team at halftime that they had to pick up the pace when they only had a seven-point lead.

“We had to make layups; we missed seven or eight in the first half, and defensively we had to be who we are,” added Myles. “We were little lax and not energetic [in the first half].

Loyola was very patient on offense,so we had to step it up on defense. We swing the ball and everybody gets their turn and that’s the best part about this team.”

Senior Jason Murphy had six points and he hauled down 12 rebounds for St. Frances, and junior point Adrian “Ace” Baldwin had six points and 10 assists. West ignited the Panthers in the third quarter with nine rebounds, one assist and one blocked shot.

“In the beginning of the game, I was a little off. I couldn’t buy a bucket,” said West, whose big second half led St. Frances past Mount St. Joseph in the MIAA A final last weekend. “My teammates started warming me up, saying ‘you got to get your head in the game’ and they sparked me.”

West also said it’s been great getting teamed with Baldwin. 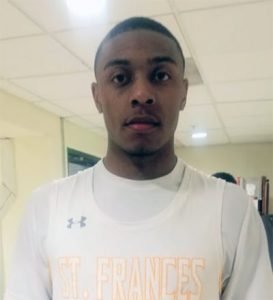 Jamal West had another big postseason game for St. Frances Friday. The junior finished with 16 points and nine rebounds for the Panthers, who will defend their BCL tourney crown against St. Maria Goretti, Sunday at 1 p.m. at Reitz Arena.

“I knew when I came to St. Frances that I wanted to play with a pass-first point guard,” said West, a transfer from Dunbar. “He always gets the ball to me when I’m open.”

Cam Smith’s 12 points for Loyola (20-13), which fell into an 11-2 hole early. But the tenacious Dons crawled back, closing to 18-17 on a basket from Connor Hepting midway in the second quarter before St. Frances closed the period on a 9-3 run.

Loyola couldn’t keep pace with the deep and talented Panthers, who outscored the Towson school, 36-22.

“I thought we battled back well and we were able to generally control the pace of play,” said Dons coach Josh Davalli. “But with their inside presence and then they started making shots from the perimeter, it was tough to stay with their weapons.”

The season was a return to glory, of sorts, for Loyola. The Dons reached the MIAA A playoffs for the first time in a decade, and Friday was their first BCL final four appearance since reaching the title game in 2009.

“Proud of our guys for the season we had,” said Davalli. “We had great leadership from our seniors and we are really going to miss them. It was a true team.”

Blakney, a Baltimore native, finished with a game-high 29 points and hauled down 11 rebounds as the Hagerstown school (28-6) completed a three-game season sweep.

Goretti opened the semifinal on a 14-0 run and then matched that outburst to open the second half while building a 43-29 advantage after St. Joe rallied to tie the game, 29-29, at halftime behind the scoring of freshman guard Antonio Hamlin, sophomore guard Ausar Crawley. junior guard Tyler Brelsford and senior guard James Bishop.

Hamlin’s jumper from the side knotted the score to give St. Joe plenty of momentum into the intermission. Goretti took it back immediately in the third quarter.

“In the third quarter, we came out with the same energy we started with,” Blakney said. “We had to play hard and lock them down defensively from the jump.”

Goretti’s transition defense was also a key in slowing down St. Joe’s ability to score off of fast breaks while forcing 17 turnovers.

“We had to stick to the script,” McCray said. “And we had to mix up our defensive match-ups.”

It mostly worked, Bishop said, because Goretti has a core of veteran performers who are used to playing in big games.

“They know how to play,” Bishop said. “They are a seasoned team. We had to play hard to get back in it. We tied it at the half and they ran off another (14-point run), and it just killed our morale.”

Mount St. Joseph (27-8) answered that salvo by scoring 12 unanswered points behind junior center Javonte Brown, senior guard Wesley Chairs and Bishop to close out the third quarter while pulling to within 43-41.

Goretti weathered that storm as Blakney hit a reverse, coaxed in a finger roll and made a conventional layup as the Hagerstown quintet fashioned an 8-3 sequence to go up, 53-44, with less than five minutes remaining in regulation. Later in the period, Blakney converted two free throws, slammed home a rebound and nailed another reverse to keep his team on top for good.

Blakney, 6-foot-5, whose mother Dafne Lee-Blakney, starred at Walbrook High and the University of Maryland in the 1980s, added five steals and three blocks Friday.

“RJ is one of the most underrated players in the state,” Goretti coach Sidney McCray said.

While St. Joe struggled to get to the rim in transition, Goretti had much more success.

It showed at the free throw line where Goretti (17 for 21) made seven more foul shots than St. Joe (6 for 10) attempted. 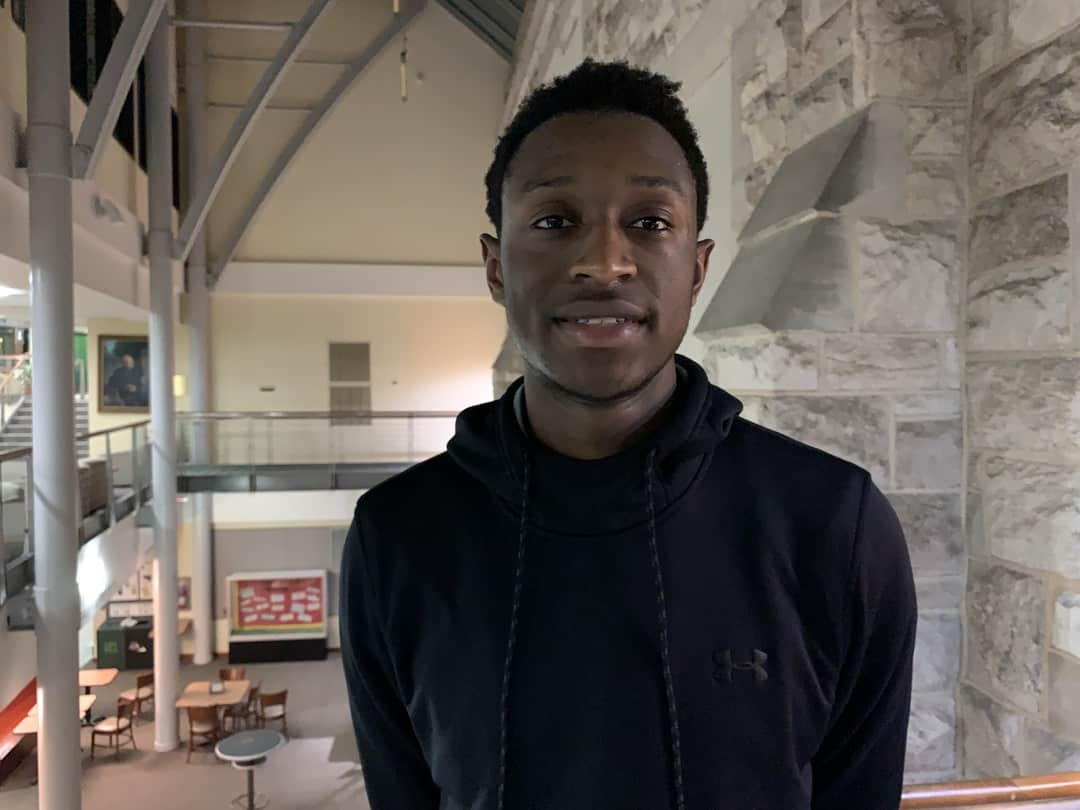 RJ Blakney helped St. Maria Goretti advanced to its first BCL Tournament final in more than a decade Friday. The senior wing had 29 points and 13 rebounds, leading the Hagerstown school to a 64-54 victory over fifth-ranked Mount St. Joseph in the other BCL final four contest at Reitz Arena.

Goretti lost twice to St. Frances during the regular season, 62-58 and 57-52, in very competitive games. The Panthers will look to win its record 9th BCL Tournament crown and become the 12th team to win the MIAA A and BCL Tournament title in the same postseason.

“We’re going to try to make it hard for them,” Blakney said. “We’ve been battling them down to the wire. It’s hard to beat a team three times in a season.”