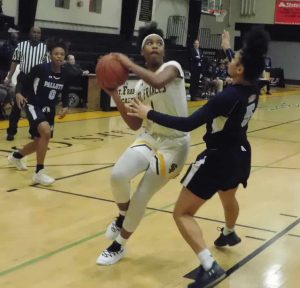 St. Frances’ Aniya Gourdine (left) draws a blocking foul on Pallotti’s Tahlia Brown-Strangerlin during the second half of Friday’s IAAM A Conference girls basketball contest. Gourdine finished with 29 points as the No. 1 Panthers took over in the fourth to defeat fifth-ranked Pallotti at Phelps Gym in east Baltimore.

Top-ranked St. Frances posted a 66-56 triumph over No. 5 St. Vincent Pallotti on Friday night in east Baltimore in a battle of Interscholastic Athletic Association of Maryland A Conference unbeatens. Gourdine, a sophomore guard, posted a game-high 29 points.

In a match with at least 15 lead changes, St. Frances (7-1 overall, 3-0 IAAM A), the three-time reigning IAAM A champs separated from Pallotti (9-3, 2-1 IAAM A) in the fourth quarter, extending its league winning streak to 41 games (including playoffs). St. Frances, ranked 21st in the latest USA Today Super 25, last league loss came in the 2015 semifinals against McDonogh School.

St. Frances, winners of 42 straight in regular season league play, had to play to its first three IAAM A tilts without star junior post Angel Reese, who had to serve a team and league-mandated suspension for a violation of team rules, according to coach Jerome Shelton. Reese, a preseason USA Today All-American, is widely regarded as a Top 5 player in the Class of 2020.

Trailing, 45-43, heading into the final frame, St. Frances outscored its Laurel rival, 23-11. Although Panthers senior guard Savawn Hughes ignited the closing run by converting back-to-back clutch drives to start the final eight minutes, it was Gourdine who kept her team in the game by scoring 21 points over the first three quarters.

It was hard,” Gourdine said. “They started doubling me, and I started finding my teammates. We showed that other people could step up, and Shavawn came up big in the fourth quarter.”

Other St. Frances players who chipped in with fine performances were juniors Khalia Turner and Madyson Hinton, both of whom scored 10 points.

Hinton did nice work on the boards and added a couple of key assists as well.

“Since Angel was out, I knew I had to step up,” Hinton said. “I’m not really a scorer, but if I do what I’m supposed to do I can score off of (offensive) rebounds.”

Following Hughes’ two drives that opened the final quarter, Turner also converted on a pass fro Hughes to up the hosts’ lead to 50-45 before freshman Daimoni Dorsey did the same on an inside look from Hinton, who then nailed a baseline jumper to stretch the margin to 54-45 midway through the period.

“In a situation like this, it’s next player up,” said St. Frances coach Jerome Shelton.  “Other players by committee have to try to give us what (Reese) she would have given us. It’s  a challenge, but to win without her builds confidence.”

Shelton added that Hughes gave the team an “emotional lift” when it was needed.

“We knew that (Reese) wouldn’t be there,” said Matthews, in his first season and fourth Panther sideline leader in the last six seasons.  “Maybe we got a little overconfident. But we always play with heart and we fight. We’re a new coaching staff with a new system, so we’re still finding our way when we get in pressure situations.”

It doesn’t get any easier for Pallotti, which hosts No. 3 McDonogh School Wednesday. Pallotti plays at resurgent and 20th-ranked Archbishop Spalding Friday.

St. Frances embarks a difficult week-long stretch, starting Sunday against Neumann-Goretti (PA) at the Blue Star Invitational in Pennsylvania. The east Baltimore school  follow with league matches against Spalding (Monday), No. 7 John Carroll School (Wednesday) and McDonogh School (Friday) before closing with a non-league special against Baltimore City power and No. 12 Western at the Private vs. Public Challenge next Saturday at McDonogh.