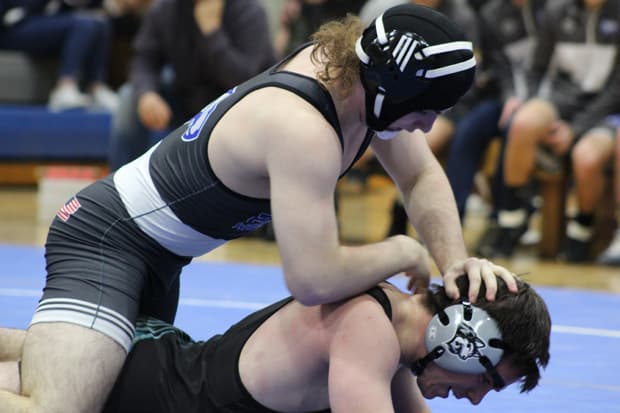 The match on Tuesday evening at Sparrows Point High School was not expected to have much overall drama or be a close dual meet. Those expectations played out as No.12 Sparrows Point rolled to a 62-10 over Harford County’s Patterson Mill.

“I was happy with how we came out,” Point coach Mike Whisner said. “They have some good kids over there. We came out hyped with Senior Night. I thought Zach Barnickel getting that win at 220 got the crowd going. I’m just proud of the guys. We’re just trying to stay healthy at this time of the year.”

Barnickel’s :40 second pin of Ty Darden did set the tone for the night as six points were regularly collected by the home team. 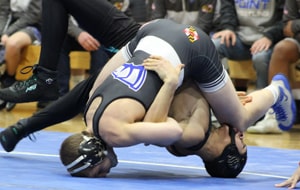 Richard Davis catches Brian Wheatley on his back.

No. 12 Mason Sprinkel put six on the board for Patterson Mill with a second period fall of Justin Kuhn, 3:19. The Huskies would not build any momentum from this result as they forfeited the next two weights to, No. 13 Dom Ambrosino (106) and Tyler Maynor (113).

Kyle Pulket tried to keep things interesting for the visitors and brought the team within eight, at 18-10, with his 10-1 major-decision over Nathan Jacoby at 126.

But alas, the Huskies would put no more points on the board as the Point swept the last nine matches. Aidon Argueta received a forfeit at 126 followed by No. 8 Richard Davis dismantling Brian Wheatley, 13-2, at 132. 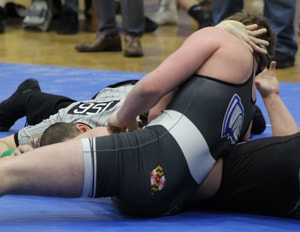 Lexx Carr picks up a fall on senior night.

“I thought it was nice,” said Rallo. “I’m proud. I’m happy. (I was nervous) a little bit. I’m nervous before every match. It was just another match. I like home matches (so) I’m glad I did it here.”

Whisner talked about the immediate road ahead for his squad.

“We have South River on Thursday. Then we have a tri on Monday with Milford (Mill) and Chesapeake and then we’re getting ready for regional duals on the following Wednesday.”

Pictured above: Sparrows Point’s Jake Rallo works from the top during his major decision over Erick Neutzling, at 170, the 100th win of Rallo’s high school career.