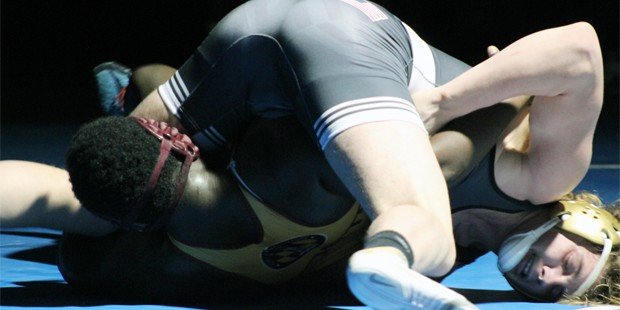 Title is second straight for the Point, and fourth in five years (VIDEO HERE)

The Sparrows Point gym is one of the toughest environments for visitors in the state. Wednesday night was no exception as the Point played host to the 1A North Region duals. The anticipated finals matchup with Dunbar (No. 14 in the Maryland state dual meet rankings) proved to be one of the best in the rivalry’s history with No.16 Sparrows Point posting a 37-30 victory.

“(It was) exciting as ever,” Sparrows Point coach Mike Whisner said. “It’s always a battle when we wrestle Dunbar. It always comes down to the end. This is the sixth time we’ve wrestled them in the last six years at regional duals. We know what they bring. They’re an outstanding group. Very well coached. We were lucky to come out with a win tonight.”

It came down to the end, as all matches between these two do. And Lexx Carr (No. 24 at 195) was ready to save the day for the Point. His opponent at 220lbs would be No. 13 Dion Crews Harris. The score sat at 31-24 in favor of the Point. Dunbar’s all-world heavyweight Jorden Pryor, a two-time state champion and VSN’s 2018 Upperweight Wrestler of the year , was waiting in the wings, so essentially, the score was 31-30 as anything less than a pin from Pryor would be shocking.

This meant Carr’s match would be the deciding factor in who would make the trip to the state duals on Saturday. Carr’s wrestling background proved to be the difference as he was able to work the Poet for a fall at the 4:38 mark of the third period.

“Honestly, I was thinking pin the whole time,” said Carr. “I was trying to rack up as many points up as I could. But finally, at the end I feel like I just had more gas than him. I just put all my will power into him and finally got him on his back and pinned him.

“With me just getting back on the team, then coming out here and I’m the final decision of the match and all, I was definitely nervous. I just had to go out there and do what I do every day in training, just go out there and win.”

For Carr to have that moment to shine, Dixon Reyes had to play the role of unlikely hero for the Point. Reyes was matched up with a foe of similar experience, Dayvon Davis. Reyes put five points on the board early and was able to withstand Davis’ attacks to pull out a 6-4 win.

“All I care about is the team,” Reyes added. “I’m not even doing individual tournaments. I don’t care about myself. The fact that I helped put a regional dual banner in this gym, to be able to say I’m a part of this great team, a part of this amazing family, it means the world to me. It’s one of the greatest moments of my life. It’s gonna be hard to beat.

“And just to think a year ago I got destroyed by the Dunbar 182, Dwayne Johnson. Now I’m here. It’s amazing. It was a tough match. It’s so difficult. I tried to do everything the coaches said, but in the end, I tried following my instincts more than anything.”

The match started at 106 with Dunbar’s Aaron Scott gaining a first period fall. The Point’s Wayne Brooks (113) answered that with a second period pin. At 120, Camerin Deville got the lead back for the Poets with a 7-5 win over Gage Carr.

The 9-6 edge would be Dunbar’s last lead as the home town boys went on a three-match tear that ended with the Point out front by 13, 22-9. Pins by Matthew Fouts (126) and Danny Davis (138) were sandwiched around a major-decision by Richard Davis at 132.

Dunbar’s No. 5 De’airus Carr made quick work of No. 12 Mike Fouts, planting him in 23 seconds at 145. Jeremiah White was having an easy time with Mike Brower at 152 and things looked to be going the Poets’ way when a headlock by White became illegal. In the scrum, Brower was injured and unable to continue, so Sparrows Point was given the win by disqualification since the injury occurred due to an illegal move.

But, just like last year, the night belonged to the hosts as they locked up their fourth dual meet region title in five years, and their second 1A North crown in a row.

“(I’m) very excited (about the title),” Whisner said. “This is our fourth in five years now. It’s a great tradition that we’re building here. I’m very blessed, we have great coaches, we have a great rec. system feeding into us. I’m just glad to be a part of it.”

Whisner was full of praise for Reyes and Lexx Carr.

“I’m speechless on that kid (Reyes). That kid stepped up in the South River match, the Huntingtown match, two huge wins for us at South River (Dual tournament). He stepped up again tonight. He’s never been a varsity starter. He sure stepped up in a big way tonight for us.

“I was extremely proud of Lexx. Moving up a weight, not one of these smaller classes where it’s only five pounds, he was stepping up 20 some pounds against that kid, and he’s a state ranked kid. For Lexx to do that is just a tremendous effort.”

“It’s always a scrap when we wrestle Sparrows Point,” Dunbar coach Doug McClain said. “I’m very pleased with Speedy (Aaron Scott) and De’airus (Carr) for going out there and getting pins on two kids people probably wouldn’t have believed they could stick. I think we wrestled some good matches, but at the end of the day, the wrestlers have to block the crowd out and make those in-match adjustments for the team. We weren’t doing that so well.”

Sparrows Point is slated to take the mat in the state semi-finals at 12 p.m. this Saturday at North Point High School in Waldorf. The Point earned the No.2 seed based on their state runner-up showing a year ago, their opponent is the South Champ, Henry E. Lackey (3rd seed).

Defending state champion, Southern Garrett, is the No.1 seed out of the West and they face Patterson Mill (East Champ) in the other semi-final. The Rams defeated the Point in last year’s finals, 47-30. The finals are scheduled for 4 p.m. Saturday afternoon.