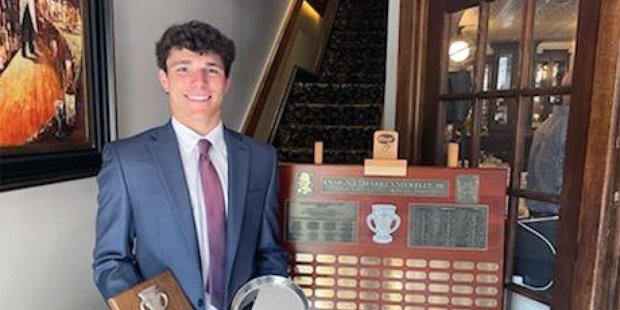 The season that nearly wasn’t turn out to be quite a memorable one for the Archbishop Spalding lacrosse team and their senior leader, Michael Weisshaar, who on Sunday was named the winner of the 2021 C. Maryland Kelly Award, symbolic of the area’s best boys’ lacrosse player, by the Maryland State Lacrosse Coaches Association (MSLCA).

Although Spalding and Weisshaar came up one goal short in their bid to win the MIAA A Conference lacrosse title, the Cavaliers achieve all-time highs as they reached the A Conference title game for the first time in program history.

For his part, Weisshaar scored 48 goals and added 23 assists in season that was much shorter than normal due to COVID-19 restrictions.

Previously, six divisional winners had been announced as finalists for the prestigious award which dates back 73 years. Weisshaar, a midfielder headed to Towson University, was the Private North Winner. The other five divisional winners were Michael Sweigart of Havre de Grace (1A), DeAndre Chaney of City College (2A), Eric Kolar of Urbana (3A), Brian Ruppel of Catonsville (4A) and William Angrick of Georgetown Prep (Private South).