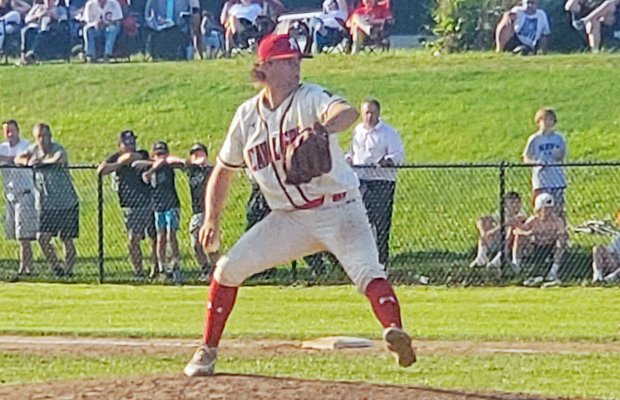 Top-ranked Archbishop Spalding advanced to the MIAA A Conference Tournament finals, Monday at Harford Community College, with a convincing, 7-2, win over visiting Calvert Hall on Thursday afternoon in Anne Arundel County, as junior right-hander Parker Thomas starred on the mound and at the plate for Coach Joe Palumbo.

Calvert Hall’s loss means that they will host upstart John Carroll on Friday at home in an elimination game. The Patriots topped Archbishop Curley,v10-2, in East Baltimore to advance. Friday’s winner will face Spalding in the finals on Monday with the Cavs (25-4) needing just one win to take the title, while their opponent will need two.

No. 3 Calvert Hall started fast against Spalding’s Thomas on Tuesday.

Jake Butler, the Cardinal’s lead-off hitter stroked a double to left on the first pitch of the game, and hot-hitting Lamar King followed with a double to deep right-center.

Butler had to hold at third as Spalding right-fielder Braeden Piotrowski quickly retrived King’s blast. Chase Davalli then coaxed a walk to load the bases, and John Harris drew a base on balls to give the Hall a 1-0 lead.

Just when it looked like Calvert Hall was on the verge of a big inning, Thomas stopped them cold by retiring the next three Cardinal batters (two on strike outs) in order to retire the side.

In the home half of the first, Eddie Sargent drew a leadoff walk off of Calvert Hall starter Ryan Seifert, and Braeden Piotrowski was hit by the pitch. The switch-hitting Thomas then whacked a 3-run homer, batting from the left side, to deep right-center.

The Cardinals (21-8) answered with a run in the third, when Butler singled and King doubled him home, but Thomas and reliever Zach Ford would keep the Cards off the board the rest of the way, holding the Hall to just one hit over the final five innings of the game.

Thomas went 5.2 innings, while fanning nine, to get the win, and Ford finished the final 1.1 innings. Seifert took the loss.

“The bulldog in him came out after a rough start,” said Palumbo. “He settled down, and was awesome. We got that huge response [in the bottom of the first] on that home run, which allowed us to get the momentum back.”

The Cavaliers got three insurance runs in the fourth, one on a solo homer from catcher Ethan McNally, and two more on a two-run single from first-baseman Tyler Smith.

Assistant coach Brooks Kerr, who led the Cardinals to a big win over Archbishop Curley on Tuesday, lauded Thomas.

“He is very good. He is Division 1 pitcher,” said Kerr. “He started to get the ball over the plate using his curve ball and his slider in the third inning.”

Kerr lamented leaving the bases loaded in the first inning [after scoring just one run].

“In that situation, we needed to get the ball in play. We didn’t make them make plays, and we struck out too many times today.”

Kerr is hopeful that Coach Eckerl, who is retiring at the conclusion of this tournament, will return on Friday. “Coach felt that he should remain cautious. He decided to wait at least one more day, before returning to the dugout.”

Pictured above: Archbishop Spalding’s Parker Thomas dominated after allowing two early runs and earned the win on the mound in the Cavaliers 7-2 victory over Calvert Hall which advanced them into the tournament finals. He also hit a 3-run home run.

Playing in the elimination bracket for a second straight day, John Carroll erased a 2-0 deficit with a six-run fifth inning and soon there after erased the remainder of No. 8 Archbishop Curley’s season with a 10-2 victory.

With the win, the Patriots (15-11) live to fight another day in the MIAA A Conference double-elimination baseball playoffs and they will travel to No. 3 Calvert Hall on Friday with an opportunity to play their way into the tournament finals.

In the fifth, John Carroll loaded the bases with one out with a single and two walks and scored its first run on Frank Adamski’s fielder’s choice ground out. Garrett Shirk then tripled home two runs to give the Patriots a lead they never relinquished. Before the inning ended Dallas Brooks and Austin Hofman each singled in runs. to give John Carroll a 6-2 lead.

Ethan Ruiz added a RBI double in the sixth and Adamski produced his second RBI groundout of the contest. Shirk struck again with an RBI double in the seventh and Matt Archibald knocked in the final run with yet another fielder’s choice grounder.

Three John Carroll pitchers, Kyle McCracken, Shirk and Ben Pierce, limited the host Friars to just two hits. Despite the lack of production the Friars (18-13) scored first with an RBI single from catcher Zach Gaeta in the third and James Gladden scored on a wild pitch in the fourth.