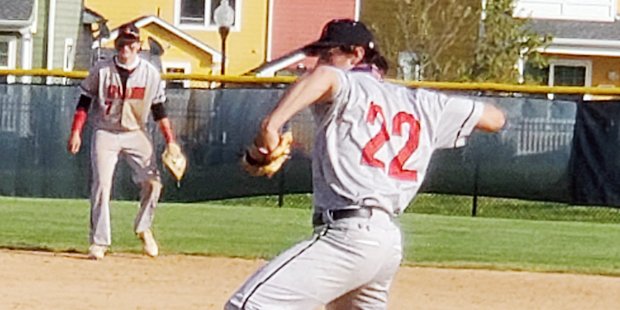 With ace Noah Mrotek dealing on the road at Archbishop Curley, Tuesday, his Archbishop Spalding baseball teammates figured to need just a minimal amount of offense to come out of East Baltimore with a win that would allow the Cavaliers to retain sole possession of first place in the MIAA A Conference.

For the first four innings, however, that proved easier said than done.

Thomas Joseph (left) hit a two-run inside the park home run and Noah Mrotek pitched a complete-game three-hit shutout as Archbishop Spalding won its ninth consecutive game with a 2-0 victory at Curley.

The Cavaliers littered the field with baserunners over the first four innings, including a bases loaded, no out situation in the top of third, but each time Curley starting pitcher James Gladden wiggled out of a jam. In the fifth, Spalding finally found a way to touch the plate, as Thomas Joseph smacked a ball off the left-field fence, with one out, and it turned into a two-run inside the park home run, paving the way to a 2-0 win for the Cavaliers.

Spalding (15-3 overall, 10-2 MIAA A), which won for the ninth consecutive time, came into the contest with a one game lead over the Friars (14-4, 8-4) at the top of the conference. The Cavaliers’ lead is now two games over Curley, Gilman and John Carroll, which are all 8-4 in the conference. It also gives Spalding a sweep of its season series with Curley and a tie-break advantage over the Friars in the race for the top seed for the post-season tournament.

Spalding’s fifth inning rally began with a leadoff single by Caleb Estes and after Gladden struck out Eddie Sargent, Joseph stepped to the plate. He drove the ball high and deep to left with Curley left-fielder Matt Sappington racing after it. Sappington and the ball arrived at the fence at the same time with Sappington unable to grab it as he crashed into the barrier. The Curley outfielder was temporarily trapped entangled with the fence, leaving Joseph free to circle the bases and chasing Estes home ahead of him.

It was a hard hit ball and I went back on it,” said Sappington, who required some brief medical attention but was able to remain in the game. “I tried to catch it, but ran out of room just as I thought I was about to catch the ball, and when I tried to get up to get the ball, my leg was stuck under the fence. This was a huge game and if I could have made that catch, it could have been a different outcome.”

Joseph said he learned something from an earlier at bat.

“I was looking for a curve ball, because he (Gladden) got me out on a curve ball in my previous at bat,” said the Cavs slugger. “I hit a hanging curve and I just started running hard when I saw him tracking it. As I rounded second base, I saw what happened and I just kept on running, all the way to home plate.”

That was all the support Mrotek needed.

In the fifth, Harry Middlebrooks broke up Mrotek’s bid for a no-hitter with a leadoff bunt single and, when Sappington singled to left with one out, the Friars had their first legitimate threat of the afternoon. Unphazed, Mrotek struck out John Petryszak and then picked Middlebrooks off at second base to end the inning.

“It wasn’t a specific pitch today, it was my zone-control,” said Mrotek, who has committed to pitch at the University of Maryland next year. “I could flip the curve in there for a strike, or get it just outside, and they were swinging on it.”

Kobe Davis had a leadoff single to start the Curley sixth, but Mrotek, who struck out nine on the afternoon, retired the final six batters to close out the complete game effort.

“Noah is one of the best pitchers in the conference,” said Curley coach Joe Gaeta. “We need to get our bats on the ball a little better, and we are going to have to fight a little harder to win.”

Gladden’s best work came in the Spalding third when a hit batter, a walk and single load the sacks for the Cavaliers with no one out. With the infield drawn in and facing the Cavaliers 3-4-5 hitters, Gladden got Joseph to ground to third-baseman Ryan Torres who cut down the lead runner at the plate. Gladden then closed the door with strike outs of Ben Wieman and Parker Thomas. Gladden worked five innings, allowing three hits while striking five and walking five.

Spalding coach Joe Palumbo was impressed with his team’s continued ability to win big games on the road.

“One of the hardest things to do in this league is come out on the road and win, and we’ve had some shutdown performances from our three aces (Mrotek, Parker Thomas and Eddie Sargent], in some very important games,” said Palumbo. “Noah’s was just that today. He was very impressive.”