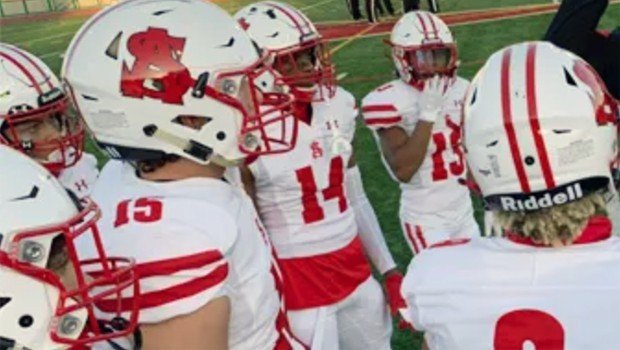 No. 2 Cavaliers romp at Gilman

One week after being held to season low 14 points in a win over McDonogh, No. 2 Archbishop Spalding rebooted its high-powered offense on Friday in Roland Park, routing host Gilman, 47-3, in MIAA A Conference football action.

The Cavaliers received the opening kick and moved the ball into Gilman territory exclusively with the running game before senior quarterback Nick Gutierrez dropped back to throw and connected with senior star Jordan Pennick in the middle of the field. Pennick made a juggling catch, side-stepped a defender and coasted the final 20 yards for a 37-yard touchdown reception.

The extra-point try hit the upright, but the Cavs had the early 6-0 lead.

Gilman responded immediately with its best offensive effort of the day. Mixing the run and the pass beautifully, senior quarterback Matt Parker led the Hounds on an 80-yard march, inside the Spalding 20, before the drive stalled. Gilman settled for a 20-yard field goal by senior Daniel Huff, cutting the Spalding lead to 6-3.

The Gilman defense prevented another Spalding score as junior Allan Gushue intercepted Gutierrez inside the Greyhound 5-yard line, but Gilman was forced to punt the ball back to the Cavaliers near midfield.

Six plays later, Gutierrez scored on a 1-yard, fourth down run, and with the extra-point kick, the Cavaliers led 13-3.

Early in the second quarter, Gutierrez absorbed a big hit as he unleashed a 28-yard throw towards Pennick in the end zone. With Gilman defensive back Jayden Barksdale providing coverage, the ball popped into the air as the two battled, before Pennick snatched it in the back corner of end zone, stretching the Spalding lead to 20-3.

Spalding’s next two drives stalled in the red zone, but each produced field goal attempts. Cory Butts converted a 36-yard field goal on the first attempt, but second, from 26-yards, was partially blocked, leaving the Cavs in front 23-3.

The lead grew to 30-3 just before the half when senior Jordan Harris scored on a 7-yard run around right end.

In the second half, Spalding added another field goal from Butts, a 17-yard touchdown catch by Jordan Brown from backup quarterback Malik Washington and a 67-yard throw from Washington to Maxwell Moss.

Gilman (4-3 overall) fell to 1-3 in league play. The Hounds will play a non-conference game at Concordia Prep next Friday, before hosting arch-rival McDonogh on Nov. 6. The winner of that game will claim the fourth and final playoff spot.