Spalding puts squeeze on No. 5 NDP 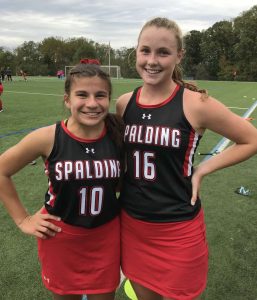 Becca Lawn (left) tallied Archbishop Spalding’s first goal with an assist from teammate Lily Grant in Tuesday’s IAAM A Conference field hockey contest against Notre Dame Prep. Grant was also part of a dogged defensive effort as No. 1 Cavaliers posted a 2-0 decision over the fifth-ranked Blazers in Anne Arundel County.

After defeating Notre Dame Prep three weeks ago, Archbishop Spalding’s veteran field hockey players knew they would have to play better in Tuesday’s rematch because the rebuilding Blazers would certainly have improved.

This time, the No. 1 Cavaliers were even stingier on defense and better at controlling the ball as they dominated No. 5 NDP to come away with a 2-0 victory in the IAAM A Conference showdown in Severn.

The back line Spalding defense of Caitlin Koehler, Lily Grant and Shelby Miller with help from midfielder Katie Fichtner allowed the host Blazers into their circle only a handful of times and left goalie Ruby DeFees little to do. The freshman keeper touched the ball just twice, making two second-half saves.

“They’re a very technically sound team,” Grant said of the Blazers, “and they’re very good at working with each other throughout the midfield and on offense, so we really had to make sure that our defense wasn’t fouling a lot and we had to work together and talk a lot to win the game.”

The Cavaliers’ teamwork stood out all over the field in their second 2-0 win over the Blazers.

“We talked about possessing the ball and we did a really good job of that,” Spalding coach Leslee Brady said. “I thought our small connective passes were really important, because NDP’s fast and the way you beat a fast team is with those short connective passes vs. trying to dribble the ball too much.”

The Cavaliers (13-2-1 overall, 4-1 IAAM A) scored twice in less than two minutes late in the first half to remain in first place in the IAAM A Conference, just ahead of No. 3 Garrison Forest School (11-2, 3-1 IAAM A), the only conference team to beat Spalding this fall.

Although the Blazers (5-6-2, 1-3-1) kept the first five Spalding shots out of the cage Tuesday, they couldn’t stop Becca Lawn’s attempt with 8:51 left in the half. The junior scored off a textbook penalty corner, punching a crossing pass from Grant high into the left side of the cage.

“Our biggest thing this year offensively is generating corners, so that we can convert in our circle  off (an advantage in) numbers,” said Lawn, whose team had seven penalty corners. “We’ve been practicing a bunch of different sets for corners and on this specific one, Lily gets it, sends it across and I just rush in. I just tried to redirect it to the opposite side and it went in.”

NDP junior goalie Brooke Borzymowski, who finished with 10 saves, faced consecutive shots on  several of occasions. Against a Spalding corner shortly after Lawn’s goal, the keeper stopped three quick shots before Kristin O’Neill redirected a rebound to Jules Ramey for a 2-0 Cavaliers lead with 6:12 left in the half.

“We knew with her, because she is a good goalie with her feet and her hands, that we really had to pass around her and support one another to be able to score,” Lawn said, “and that happened with the second goal. Kristin tipped it and Jules was able to get it around [Borzymowksi]. Team effort again.”

Borzymowski said the Cavaliers, who took 15 shots, excel at attacking in a variety of ways.

“When they get to the 25 (yard line), they’re really skilled around the goal and they just kind of hit the ball in and they play tips, they play lifts — especially on that one corner when they lifted up from the side and just waited for a tip. I think that’s a great thing to do, just play to put the ball in the goal. I think they do that great and they have so many stick skills coming in in the midfield and playing around the circle.

For the two-time defending A Conference champion Blazers, this has been a learning process after graduating 11 seniors, but Brozymowski said she’s seeing plenty of progress.

“It’s definitely a year where we have to concentrate on building more,” Borzymowski said. “Like getting down by a goal or two, we just have to keep getting back to it and not get down on ourselves because we’re so young. I definitely think we are getting better, but it’s going to take time and I think everyone’s come to terms with that. I think we’re just building until we peak at playoff time.”

The Cavaliers and the Blazers each have three A Conference games remaining in the little over two weeks left in the regular season. With only five teams in the conference this fall, each plays the others twice. Some will meet a third time in the tournament with the title game scheduled for Nov. 3 at Stevenson University.