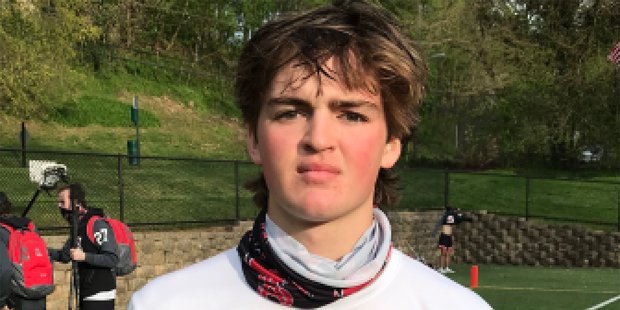 Ross’ second half defense keys Cavaliers to another big victory

Archbishop Spalding’s boys lacrosse team continued its impressive 2021 run in the MIAA A Conference on Friday, outscoring Boys’ Latin School, 14-12, in an offensive firestorm in North Baltimore on Friday afternoon.

Junior attackman Race Ripley (1G, 4A) got the Cavaliers started when he found senior Finn Kelly (3G, 1A) all alone on the doorstep with barely one minute elapsed. The upstart Cavaliers used their frenetic passing game and impressive athleticism to race out to a 4-1 first quarter lead. Laker senior attackman and UVA commit Dom Pietramala (5G, 3A) promptly responded with his trademark left-handed howitzer, leading his squad to a 5-5 tie with 7:55 remaining in the second quarter. 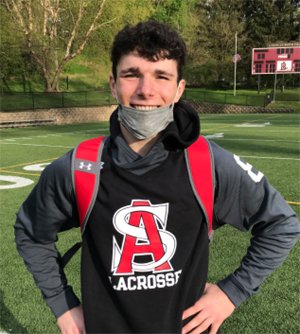 Spalding junior Michael Weishaar led the Cavaliers offense with four goals and three assists, including the clinching score with 40 seconds to play.

End to end action ensued, showing why these two squads are both ranked in the top 20 nationally. BL face-off specialist Mac Moreland helped keep the Lakers close with several first half wins at the X. Spalding senior middie Joshua Tang deposited another Ripley feed to give the Cavs a 9-7 lead going into halftime.

Spalding junior defenseman Alex Ross was given the daunting task of guarding Pietramala in the second half, and the Penn State commit did not disappoint. Using lightning-fast footwork and overplaying Pietramala’s left hand, Ross held his counterpart to one goal and one assist the rest of the way.

Spalding head coach Brian Phipps explained the defensive switch. “Alex is one of the best defensemen in the country. That’s a matchup you will be seeing on Saturdays in Division 1 going forward.”

Ross has seen Pietramala before. “He’s a very talented lefty. He deserves a lot of credit. I think footwork is the key to guarding him. I take pride in my footwork, playing on the ball, and playing good team defense,” said the Davidsonville native.

Pietramala pulled the Lakers to within one goal late in the fourth, with a dazzling, spinning one handed shot between three defenders at the top of the crease. An untimely offside penalty sealed the Lakers fate however, giving junior middie Michael Weisshaar the chance to juke his defender and score the final goal sprinting full speed across the crease with 40 seconds remaining.

Boys’ Latin coach Brian Farrell was impressed with his team’s willingness to battle and optimistic about his squad’s future.

“That was two quality teams looking to get a win in the MIAA,” said Farrell. “I liked our patience in the first half, letting the game come to us. We both shot the ball well today, and at the end of the game, they just scored two more goals than us.”

Coach Phipps agreed. “Two really competitive teams out there today. Two of the best teams in the country. Just an awesome Friday in the MIAA.”

Syracuse bound senior Finn Kelly was asked about Spalding’s frenetic passing game. “That’s something we work on in practice a lot. In game situations we really concentrate on our stick work, playing well, and it really worked out well for us today.”

Weisshaar (4G, 3A) added, “It really shows that we trust our teammates too. Most of us have been playing together since third grade with the Annapolis Hawks. We’re really looking for a championship.”

Spalding (7-1) overall improved to 5-1 in the A Conference, one game back of undefeated McDonogh School, which handed the Cavaliers a two goal setback earlier in the season. Boys’ Latin (3-2 overall) is now 2-2 in the conference, part of a group of five teams all with two losses in the conference.

Pictured above: Archbishop Spalding defender Alex Ross, who is committed to Penn State, slowed BL’s Dom Pietramala with an excellent second half defensive effort, allowing the Cavaliers to hold off the Lakers, 14-12.