Spalding closes in on an MIAA A playoff berth

Archbishop Spalding took a giant step in their quest to secure a playoff spot in the Red Division of the MIAA A Conference, Friday, with a resounding 81-49 win over a fading Boys Latin squad, in Anne Arundel County.

The Cavaliers (16-9 overall, 10-7 MIAA A), have a half game lead over Loyola Blakefield (9-7), which defeated McDonogh 72-48 on Friday, and they can clinch a playoff berth with a win in their final regular season A Conference, next Wednesday, as they host Mount Carmel (5-11). 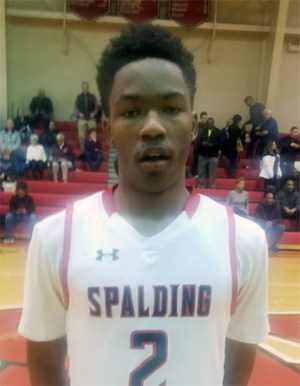 Eleven different players scored for Coach Josh Pratt’s Cavaliers on Friday night, with sophomore Ty Peterson leading the way with 22 points, 10 of which came in the second quarter when Spalding pulled away from the Lakers, who have now dropped six straight.

Both teams came out hot in the first quarter, which ended in a 23-23 tie. The Cavaliers got 23 more in the second stanza, but the Lakers could only muster nine, as the Cavs zoomed out to a 46-32 halftime lead.

Josh Rivers came off the bench to nail two consecutive deep three-pointers at the four minute mark in the second quarter to help the Cavs extend their lead to 12, and they never looked back.

Pratt said he was proud of his team.

“We’ve been preaching all year about how deep we are and it’s been a case of next man up, and every player being all in,” said Pratt. “We had good chemistry tonight, and we defended well.

“We’re working hard to make the playoffs, and coming in, I was concerned that we might have a let down, coming off a our upset win (67-56) over Mount Saint Joe on Wednesday night. We got good minutes from Jalen Bouknight, Josh Akers and Zakee Wheatley tonight.

“Chidera stepped up defensively. He was challenged with the job of trying to stop the Lakers high scoring Lorenzo Donadio, and he did a good job.”