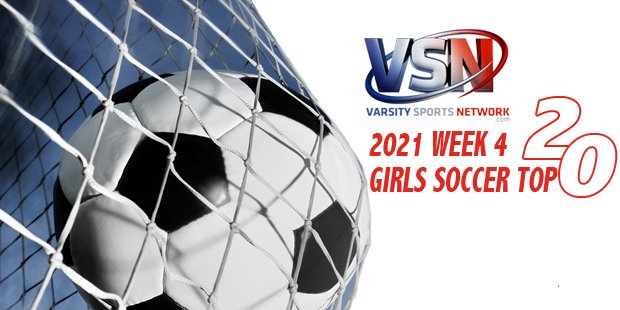 Glenelg and Northeast make entrance into this week’s poll

Despite becoming the second team in the VSN Girls Soccer Week 4 Top 20 to suffer a loss to District power Our Lady of Good Counsel, Archbishop Spalding High has improved to 5-1 and moved up to the No. 1 spot in our weekly rankings.

McDonogh School, the other team which has lost to Good Counsel, has moved up to No. 2 as the Eagles and Cavaliers prepare to do battle at McDonogh on Wednesday.

Undefeated Marriotts Ridge and Notre PDame rep have moved up to No. 3 and No. 4, respectively, while Mercy has moved back into the Top 5 at No. 5.

There are two new teams in the poll this week as Howard County’s Glenelg comes in at No. 19, followed by No. 20 Northeast.

Note: The Cavaliers became the second Top 5 team to fall District area power Good Counsel this year, but still ascend to No. 1

Note: The Eagles challenge No. 1 Archbishop Spalding at home on Wednesday.

Note: The Blazers will have been idle for 12 days when they host John Carroll School Wednesday.

Note: Bruins get first blemish as Crofton plays the Bruins to 2-2 draw.

Note: The Falcons have registered clean sheets in their victories.

Note: Gators will put undefeated record on the line at No. 5 Mercy Wednesday.

Note: The Knights gave up five goals in loss to then-No. 6 Mercy.

Note: The Mavericks remain undefeated by tie with then-No. 19 Towson.

Note: The Admirals have only loss to No. 4 Notre Dame Prep.

Note: Postponements have stymied the Lions’ progress, but big week lies ahead.

Note: The Cougars picked up third win with shutout of Patterson Mill.

Note: The Bulls were shutout by Perry Hall, but still posted 2-1 week.

Note: A productive week for the Generals included 11-1 win over Parkville and draw with then-No. 9 Eastern Tech.

Note: After opening with three straight shutout victories, the Gladiators were handed their first loss by undefeated Marriotts Ridge.