Spalding and Curley win again in A Conference baseball 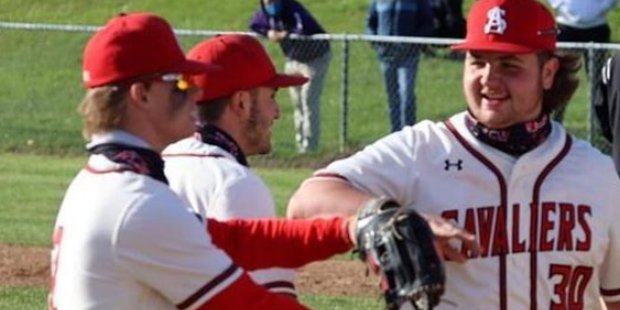 Cavaliers get another mound masterpiece while the Friars slug their way to a season sweep of St. Mary’s

The two top baseball teams in the MIAA A Conference thus far this season each reached the win column once again on Monday, as first-place Archbishop Spalding shutout visiting McDonogh, 5-0, while second-place Archbishop Curley slugged its way to a 17-8 road win over St. Mary’s.

Spalding, which has gotten a string of outstanding pitching performance over the first half of the league schedule, got another masterpiece on Monday as Eddie Sargent tossed a complete game one-hitter against the Eagles. Of the 21 outs Sargent recorded, 15 were strikeouts. He did not walk anyone and needed just 77 pitches to go the distance.

McDonogh’s Sam Kinney and Devin Pal combined to limit the Cavaliers to just five hits, but it was more than enough to support Sargent on this afternoon.

Sargent also scored the first run of the day as he drew a two-out walk in the bottom of the fourth, moved into scoring position on a single by Thomas Joseph and scored on an RBI single by Ben Wieman. The big blow of the day came in the fourth when Caleb Estes launched a two-run home run to up Spalding’s lead to 3-0.

The Cavaliers added their final two runs in the sixth on an RBI double by Ethan McNally and a bases loaded walk by Wieman.

McDonogh’s only hit was a one-out double by Ben Kinney with one out in the top of the first. Sargent would get the next two Eagles to end the threat and retired nine straight before Sam Kinney reached base on an error in the fourth. Sargent then retired the final 11 batters of the game.

Visiting Archbishop Curley produced a pair of eight-run innings and that made for a comfortable day for the Friars as they rolled to a 17-8 win over St. Mary’s at Bestgate Park in Annapolis, completing a regular season sweep of the Saints.

Ryan Edmonds had a huge day at the plate for Curley (13-2, 7-2), going 4-for-4 with a double, an RBI and three runs scored. Catcher Zach Gaeta added a double and three RBI’s and Ryan Torres had two hits, including a double, two runs scored and two driven home. In addition, Harry Middlebrooks walked three times and was credited with three RBI’s and Cam Munk scored three and drove in two.

Curley scored eight in the top of the second and led 9-1 when St. Mary’s scored six times in the bottom of the fourth to make things interesting. The Friars fired right back with an 8-run fifth to regain full control.

Jon Madden and Michael Coit each doubled for the Saints and they drove in two runs each. Coit, Henry Carbone, Eric Chaney and Brennan Moran all had two hits for St. Mary’s (3-7, 2-7).