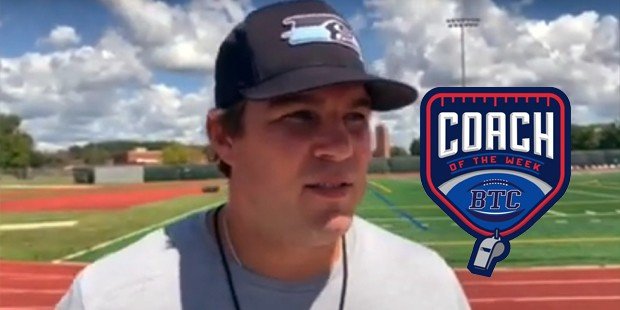 by Gary Adornato
With perennial powers Broadneck, Old Mill and Arundel dominating the Anne Arundel County football landscape in recent years, it is easy to overlook the emergence of the South River program under head coach Ed Dolch.
Dolch’s Seahawks are 6-0, heading into a major road showdown with Broadneck, Friday night, and are averaging better than 45 points per game and have eclipsed 60 points twice. Last week, South River routed Severna Park, 42-19, to improve to 5-0 in the County and earn Dolch the honor of being named Baltimore Touchdown Club Coach of the Week.
Dolch, who graduated from McDonogh in 2002 and went on to play college football at McDaniel College and Salisbury State University, matriculated to Indiana, where his wife was working, to begin his coaching career in 2009.
He spent four years coaching linebackers and running backs at Indianapolis’ Arlington High School before spending two years as the defensive coordinator at George Washington Community High School.
In 2014, he was asked to interview for the vacant head coaching position with the Seahawks and was offered it. His wife was able to transfer her job to Maryland and his family came home.
His first three seasons with the Hawks were rough as they won just eight of 30 games. Since then, however, the team is 19-5.
In 2018, the Seahawks went 7-5 and reached the regional finals. The Hawks really came on late in the year and had won four straight games before suffering a 46-7 playoff loss to North Point.