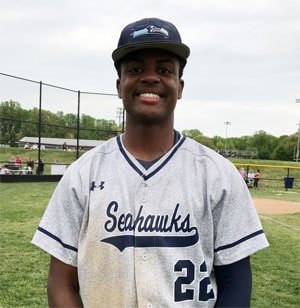 South River senior Kavi Caster delivered with his left arm and at the plate in leading the Seahawks to a 5-0 shutout of No. 6 Broadneck.

Kavi Caster spoiled Senior Day at Broadneck High School on Thursday afternoon with a four-hit 5-0 shutout of the No. 6 Bruins. South River’s senior left-handed ace went the distance for the 12th-ranked Seahawks leaving Broadneck and South River tied for first place at 10-3 each in Anne Arundel County.

Caster could not have done it without his center-fielder Cam Rees, who made the highlight reel big time and Seahawk fans can’t stop clicking rewind.

The top two teams in the 12-team league after the 16-game schedule (three games left) will play for the Anne Arundel County championship on Tuesday, May 7 at Bachman Park (7:00 p.m). Defending county champion, No. 8 Severna Park is currently a game behind Broadneck (12-3) and South River (11-4) along with several other teams. It’s going to come down to the wire to determine the top two teams.

If Broadneck and South River tie, the nod goes to the latter Seahawks who have taken a pair from the Bruins this spring, the other by 4-2 back on March 27 with junior lefty Cael Huyer the winning pitcher.

Caster is now 3-1 with the latest victory, all three wins against ranked teams, Severna Park, 3-1 on a three-hitter with 12 K’s; 10-5 over No. 9 Chesapeake on a five-hitter, and Broadneck on a four-hitter with four strikeouts and only one walk on 91 pitches. The left-hander’s only defeat came at the hands of Old Mill by 3-1 on April 17, his last start before Broadneck. 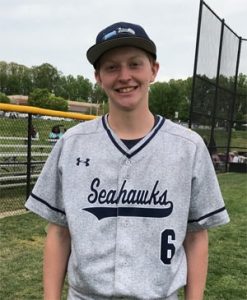 “I was missing a lot today trying to hit the outside portion (of the plate) so, I changed it up and I started jamming them a lot of times because I could see they weren’t really hitting it,” said Caster who started a
pair of 1-6-3 DP’s to erase potential threats in the second and fourth innings. “I changed my approach a little bit and it paid off. I didn’t need my curve ball as much as other games.”

Broadneck right-hander Dillon Smith (2-1) pitched well enough to win going six innings on 93 pitches, giving up seven hits, striking out five, walking only one and yielding three runs (two earned). The visitors got to Smith for a run in the top of the third on leadoff batter/shortstop Chris Nalley’s single to center following No. 9 hitter Chris Sheridan’s single and stolen base.

Derrick Neff’s fielder’s choice produced another run for a 2-0 lead in the fourth. A 4-6-3 double-play by the Bruins in the top of the fifth prevented a third run and in the bottom of the frame Rees kept the Bruins from getting on the board.

Leadoff man Ryan Smolen reached on an error with two outs. Nick Gatton came up and drove a Caster fast ball deep into the right-centerfield gap with extra base hit and RBI written all over. Rees tore after it and at the last second dove and sprawled, clutching the baseball in his glove for the third out. It was a huge catch that not only prevented a run, but prevented the middle of the Bruins’ batting order from coming up.

“Yeah, that saved me,” said Caster who is slated to play at Salisbury next year. “I missed my spot badly and he (Gatton) roped one. Cam saved my butt on that play.”

Caster and Rees rotate from center-field to the mound and the latter had his partner’s back at Broadneck.

“I thought the ball was really far out and didn’t know if I was going to get there in time,” said Rees. “I just started sprinting as hard as I could and happened to get it in the long run.”

Was it the best catch of his high school career?

“By far, yes,” said a smiling Rees. “It was a great moment, especially when my teammates started running out to congratulating me. It felt like it was a huge turning point.”

No doubt about it as the Seahawks added a run in the sixth and two more in the seventh with Caster figuring in the scoring with his bat and completing the shutout with his left arm.

After the spectacular catch by Rees, Caster led off the top of the sixth with a single to center and the young man who just might be Anne Arundel County’s best all-around player as a pitcher/speedy center-fielder and hitter put his blazing speed on display, pilfering second and third. Broadneck catcher Jackson Halla, who has a strong arm and quick release, dropped the ball with Caster stealing second with a head first slide. With the jump the latter got, Halla would not have had a shot anyway.

Caster, who plays as hard as any kid can play, got a huge lead-off second and swiped third standing up. After an out, Caster scored easily on Huyer’s pop fly single to left center. An error scored the fourth run in the top of the seventh and Caster lined a ground rule two-bagger down the right-field line to score Nalley with the fifth run. 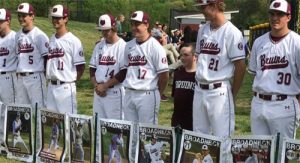 Prior to first pitch, Broadneck’s seniors were honored on the Bruins’ Senior Day.

On the bump, Caster retired the Bruins in order in each of the sixth and seventh innings after the first batter reached in each of the final two innings. Strangely, as in command as Caster was, the Bruins started
five of their seven at-bats with the first man getting aboard but to no avail.

“Kavi Caster did a great job today,” Broadneck skipper Matt Skrenchuk. “He stayed ahead of us all day (lot of first pitch strikes). Yeah, he was efficient and we didn’t keep to our approach and drive the ball the
other way.”

It was the second time this season that Broadneck knocked off Severna Park and the next game lost to South River. Yes, the parity could be previewing an exciting post season in 2019.