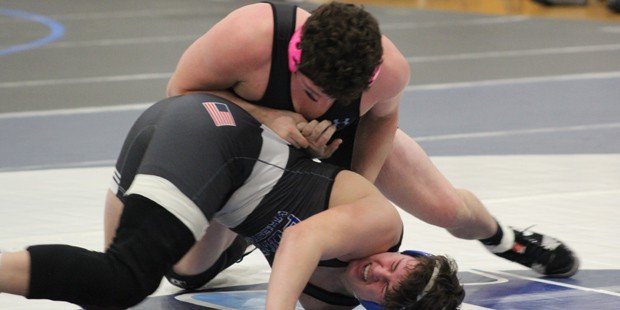 No. 12 Sparrows Point was flying high after a big Senior Night win on Tuesday night at its place over Patterson Mill. On Thursday afternoon, they took to the road to take on an unranked South River squad in Anne Arundel County.

No one on hand would have been surprised if the hosts came out sluggish after Wednesday’s big 42-19 win at Old Mill. Unfortunately for Sparrows Point, there would be no such hangover, and the Pointers were the ones who seemed out of sorts to the tune of a 46-23 drubbing.

“I was pleasantly surprised,” South River coach John Klessinger said. “I thought my kids wrestled hard. I think as a whole, that was overall, one of our best team efforts that we’ve had all season. Thinking about it, it’s slowly coming together. (It) was a good team effort.”

Things started on an up note for the Point with Tyler Maynor padding his stats with a 13-2 major-decision over Ben Travis at 106. 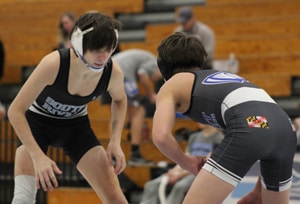 Nolan Lunsford (113) got South River started on a four-match winning streak with a 7-0 win over Dominic Ambrosino.

“I feel like it’s kind of an accomplishment that they’re bumping kids up to wrestle me,” Lunsford continued. “It just shows how I’ve progressed over the years, throughout junior league and into high school. We needed something to get the team on a roll, so I got out there and tried my hardest to get our team going and fired up. I was hoping for a major or a pin, so I was a little bit upset but I was excited.”

Sparrows Point had two of its big guns loaded next. At 138, Richard Davis (No. 8 at 132) faced off with Issac Barber (No. 11 at 132) in what was a scoreless bout until mid-way through the third period when Davis locked up a cradle and settled in for the pin at the 5:13 mark. Luke Hoenig (145) rolled to a 12-4 major decision of Patrick Mooney.

The momentum would not last and the seven-point deficit (21-14) only grew for the Point as the Seahawks answered their pin and major-decision with likewise results, Mike Byers (152) majored Zach Adams, 12-1, Sean Adams (160) planted Jake Lure in 55 seconds, for a 31-14 home team lead.

“Guys wrestled tough in places that we needed them,” added Klessinger. “We lost a match or two that could be different next time. Like Barber, he was in a tight match and gets caught in a cradle.”

No. 6 Jake Rallo (170) got quite a scare from South River’s Lonnell Owens-Pabon (No. 20 at 182). Owens-Pabon held the lead at one point, but Rallo, who could see his undefeated season on the brink of ending, rallied to squeak by, 8-7.

With the score sitting at 31-17 in favor of Sam Hick’s Seahawks, he was presented with a chance to play the hero as a pin would seal the win. Hicks obliged the crowd and controlled the match, working towards that victorious fall in the third period, 4:41.

“Last year, I lost a match to this same team that cost us our tournament (South River Duals),” Hicks said. “I went out there and I told myself, I have to win this match for personal reasons and even more, I have to win it for the team.

When Hicks started the turn that led to Mike Brower’s end, one thing was going through his mind.

“I gotta pin him, I gotta do it, it’s something I gotta do. It’s just taking care of business you know? (I) worked every day in the room for that, that moment of pinning him.”

At 220, Kevin Lippincott picked up a fall over Zach Barnickel, 1:06, and heavyweight Racheil Coney earned a hard fought 3-1 win with Shawn Wolford to make the final tally, 46-23.

Asked if he was worried about his team being flat today, and how he motivated them for the quick turnaround, Klessinger remarked.

“We try not to make any match too big. It’s just another match. If they take that approach to it, and not make one thing bigger than another, hopefully at least in their mind it’s just another day and they’ll go out and wrestle hard regardless. We try to keep it the same. We didn’t make any big speech, any hype, or anything about it. It’s just the same as usual, go out and wrestle hard, be aware of bonus points, try to get them and not give them up.”

Pictured above: South River’s Sam Hicks (top) picked up a fall at 182 to seal the Seahawks victory over Sparrows Point.