South River comes out on top in AACo showdown with Broadneck 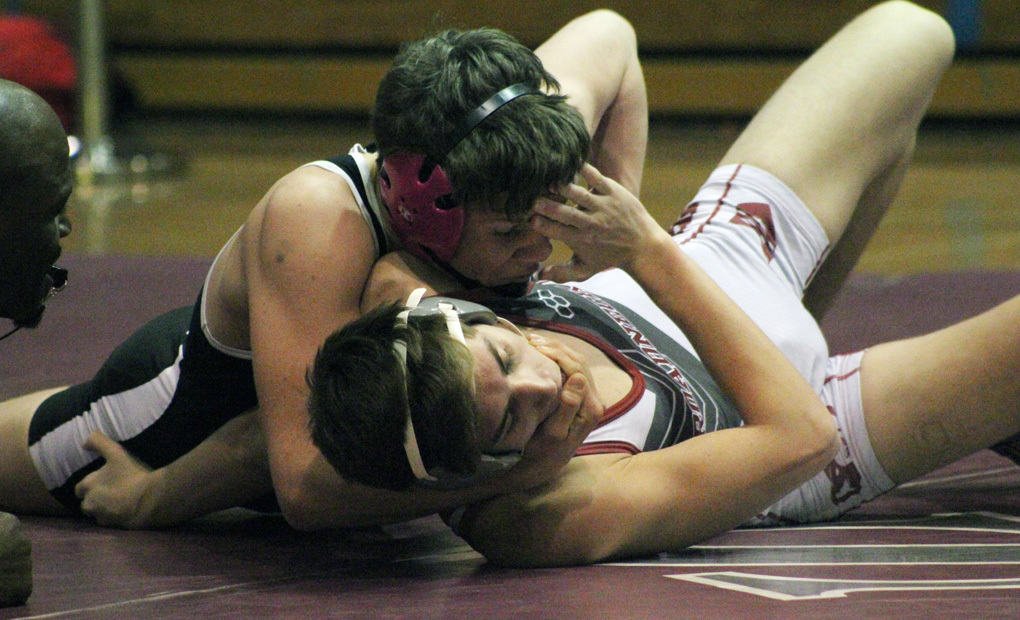 With a close match expected and every point at a premium, South River’s Trenton Puccinnelli (above left) delivered for his squad with a technical fall over the Bruins’ Drake Pollock at 152, clinching the victory for the Seahawks.

South River (No. 17 in BillyB’s Wrestling World Maryland Rankings) came into Wednesday night’s matchup at Broadneck High School as the favored team. Both squads knew that, rankings aside, this was going to be a tight match that could go either way.

The battle proved to be a wild one that saw the Bruins take an early lead, and the Seahawks battle back. The dual ultimately came down to the final bout as both coaches figured it would.

“I knew it was gonna be back and forth,” South River coach John Klessinger said. “It was a competitive match. It was a good match across the board. Some of my kids stepped up. My 220 stepped up, my 70 stepped up. In a match like this where every point matters you gotta minimize the damage. As we tell the kids, just staying off your back sometimes is a win for us.”

Broadneck came out to wrestle. We knew they were a tough team. I’m glad our kids found a way to win. Some of the matchups we didn’t get, but fortunately, we knew what they had, and they knew what we had. They’re real solid from 82 up. It kind of played out how we expected.”

The meet started out at 160lbs featuring Broadneck’s Mach Groah and South River’s Jonas Beardmore. Groah beat Beardmore at last year’s county and region tournament, and came through again for the Bruins pinning the Seahawk with six seconds left in the second period.

Riley Corkran picked up a decision at 170lbs, 5-1, over Kyle Keller to put South River’s first points on the board. No. 18 Zach Doyle (182) and No. 19 Vinny Facciponti followed with pins for Broadneck to push the score to 18-3.

This set the stage for the only match of the night that featured two ranked opponents squaring off. No. 19 Alex Peterson stopped the bleeding for South River with a 4-2 overtime win against No. 20 Noah Genovese.

“I had to go out there and win for the team to get us back on the board,” said Peterson. “Coach wanted us to win this match really bad. The guy before me just lost, so I just had it on my mind I have to get this win to get our team back on.”

Austin Simpson took to the mat at 113lbs and delivered a fall over Ethan Kanetsky at the 3:43 mark of the second period to give South River its first lead of the night, 24-18.

“I really just knew that our team needed me to pin the kid, so we could gain control again to win the match,” Simpson added. “I just had on my mind that I was gonna get the win and the team needed it. I’ve been training hard for a while so it all paid off.”

At 120lbs, Isaac Barber (No. 21) kept the momentum rolling for South River when he planted Jacob Miller in the first period to give the Seahawks a 12-point lead, 30-18.
Broadneck’s Nic Schardt (No. 21 at 132) cut to 126lbs, and the moved paid off as he was able to secure a 6-3 decision over Tyler Larson to get the Bruins back in the win column.

No. 22 Calvin Brumfield (132) gained a third period fall over Terrance White to put more points on the board for South River and give them a 15-point edge, 36-21.
Broadneck was not going away though, No.17 Mike Garlington (138) registered a fall and No. 17 Owen Joyce tallied a major-decision at 145 to bring the Bruins within five of the lead. Each wrestler at 145 was hit with unsportsmanlike conduct as things got chippy after the match, so the score was 35-30 heading into the last match of the night.

Broadneck’s Drake Pollock (152) faced a tough task needing a pin for the win or a technical-fall to tie against Trenton Puccinelli (No. 13 at 145). On this night, though, the technical-fall would be wrung up by Puccinelli, 15-0, to seal the win for the Seahawks, 40-30.

“I never wrestled the kid before,” Puccinelli continued. “I saw he was long and lanky, so you’re always watching out for ankle-picks and cradles. But I just went out there and kinda did my thing and did the best for the team. I was coming out knowing I was already gonna beat him. I never wrestled him a day in my life and I knew I was gonna beat him. There was no ifs, ands, or buts. It was either gonna be me winning, or him losing. I woulda liked to end it with a pin, but I guess a tech fall is good any day of the week really. I can’t be upset with a win.”

Broadneck coach Reid Bloomfield felt the match lived up to the hype.

Video of all matches:
160-Groah vs Beardmore

Seahawks overcome early deficit to win by ten, 40-30 (VIDEO OF EVERY MATCH HERE)