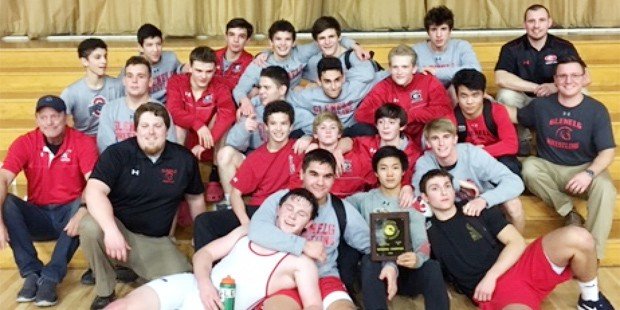 Glenelg junior Jacob Durkin claims not to know the overall score of the Gladiators’ dual meet at South Carroll when he stepped onto the mat for his 220-pound bout against the Cavaliers’ junior Shane Allison.

But he did know that he had to win if his squad was to capture its fifth straight regional duals crown, this, being the Class 2A West version.

“I wasn’t paying attention because I was in the back corner getting myself ready, so I honestly didn’t know the score,” said Durkin. “My coaches told me that I’d been putting in the work, and to use that to my advantage. They told me that my time was right now, and to just go out there and get it done.”

Durkin earned a come-from-behind, 3-2 victory over Allison on a stalling call within the final 30 seconds, turning a two-point deficit into a 33-32 victory and securing the Class 2A West Regional Duals crown over the host Cavaliers (14-2).

Durkin’s triumph capped a three-bout sweep by the Gladiators (20-3), who trailed, 32-18, before receiving a 51-second pin from Nicholas Kingsbury (182) and a forfeit to state champion Drew Sotka (195).

“Last year, I was behind Drew Sotka, and I couldn’t go up a weight class because they had [sixth place state finisher] Jake Arnone, and I couldn’t go down a weight because I was behind [fifth-place state finisher] Jacob Jones,” said Durkin, whose failure to make last year’s varsity lineup relegated him to the junior varsity, where he was an undefeated county champion.
.
“In the first period, I didn’t make didn’t make the smartest decision, shooting a low single without a good angle. So, Allison got around me and scored a takedown. Going into the third period, he already had a stall warning. Within the first minute of the third period, he got another stall call, and then, another in the final 30 seconds.”

Hamper stepped down after 2017, setting the stage for Matt Thomas, a Northern-Garrett graduate who placed three times at states and wrestled for Division II Liberty. Thomas guided the Cavaliers to a Carroll County tournament crown in 2019, and this year’s county dual meet title.

“I was extremely proud with how the guys battled today,” said coach Matt Bichner, a former state champion at Glenelg whose Gladiators earned their fifth regional title and have been state dual runners-up during each of the past three seasons. “We knew both teams we could face were gonna be tough and that it was gonna take all 14 guys doing their job, whether it be limiting bonus points or pulling through in a tough match.”

The Cavaliers won three of the first four bouts for a 10-6 lead, following a pin from the Gladiators’ junior Lucas Suri with a pair of decisions from freshmen Michael Pizzuto (106) and Gage Owen (120) around a major decision by sophomore state runner-up Ryan Athey (113). Pizzuto improved to 41-0, Athey, to 39-1, and Owen, to 38-3.

The Gladiators were within, 10-9, following a 3-2 decision by sophomore junior varsity county runner-up Taegon Hibbitts (126) over sophomore Anthony Bond, but the Cavaliers reeled off three straight for a 26-9 lead on a major decision from freshman AJ Rodrigues (132), and consecutive first-period pins by junior Jake Rippeon (138) and freshman Rylan Moose (145).

Rippeon is a county champion, and Rodrigues improved to 41-1, his lone loss being against two-time state champion James Riveira of C. Milton Wright.

The Gladiators were within, 26-18, following consecutive victories by sophomore junior varsity county champion Kian Payne (152) and junior Ethan Mackey (160) on a decision and a second-period pin, but state runner-up junior Antonio Bradford (170) stretched the Cavaliers’ lead to 32-18 before Durkin and company sealed the win.

“I knew I had to hold Allison down, pound on him and make him give up. When it was over, I saw that my entire team was hyped up,” said Durkin. “I knew that a lot of the South Carroll kids were pretty disappointed because I’ve wrestled with a lot of them in the Mount Airey Mustangs’ program. But we’re going to states, and this is awesome.”

The Gladiators, meanwhile, will pursue a Class 2A state title on Saturday at North Point High.

“This team has really grown as the season has progressed,” said Bichner. “I’m excited for the opportunity to compete for a state title on Saturday.”