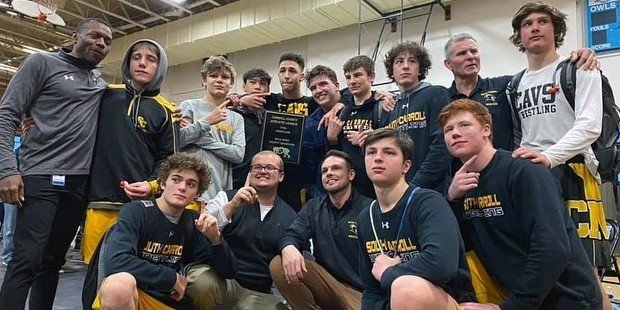 Manchester Valley comes out ahead of the county wrestling tournament tally

A new system was all the rage at the Carroll County Wrestling tournament on Saturday at Westminster High School. That rage was not the good kind though, it was the kind best avoided. The powers that be implemented a new procedure for determining the county wrestling champions this year. The problem is, apparently the coaches were not asked to vote on this, and it led to some head scratching.

The point total from Saturday’s action favored No.10 Manchester Valley over No. 6 South Carroll by three points, 190.5-187.5. Because the Cavaliers won the dual meet crown and CCPS having a combined system this year, South Carroll is the champ due to the head-to-head tiebreaker.

VSN was provided with the following information:

South Carroll certainly won the battle for number of champs, posting titlists in half of the weight classes in going a perfect seven-for-seven in the finals. Manchester Valley had three golds, while no other team crowned more than one champion.

The Cavaliers started off with a bang as four of their freshmen brought home titles in the first six weights.
The star of that stretch would have to be No. 4 AJ Rodrigues who gained his edge with a 2-1 overtime decision of Winters Mill’s state runner-up and county champ Zach Kirby (No. 5). Rodrigues also downed the Falcon in the regional duals, 3-2.

Richie Summerlin grabbed his first gold as well with a 7-5 win over Zach Brathuhn (Manchester Valley) at heavyweight. Sophomore Ryan Athey (No. 7 at 113) put his second title in the book with a quick pin of Westminster’s Ivan Allen, 1:12. Athey finished second in the 2A/1A states a year ago.

No. 6 Antonio Bradford had his own state final heartbreak last year. The junior took the first steps towards erasing that blow by capturing his second county crown after being second as a freshman, dropping Liberty’s Justin Richardson in 39 seconds.

Manchester Valley’s three-point edge came about from its depth as they pushed 13 wrestlers to spots on the podium to South Carroll’s 11. They matched the Cavaliers with seven in the finals but could not equal their gold medal haul.

No. 12 Adam Mattson was the Maverick’s other representative at the top of the awards stand after pinning No. 19 Noah Ocasio (Winters Mill) in the first period, 1:22.

Westminster’s Kaden Bryan’s 10-4 win over Winters Mill’s Cian Murphy for the 195lb crown helped his team to a fourth-place spot in the standings. Liberty was fifth as No.11 McClain Butler, a senior, claimed the 182lb title, 6-2, over the Maverick’s Livingston. Butler was second as a junior.

***All rankings are by BillyB’s Wrestling World unless otherwise notated