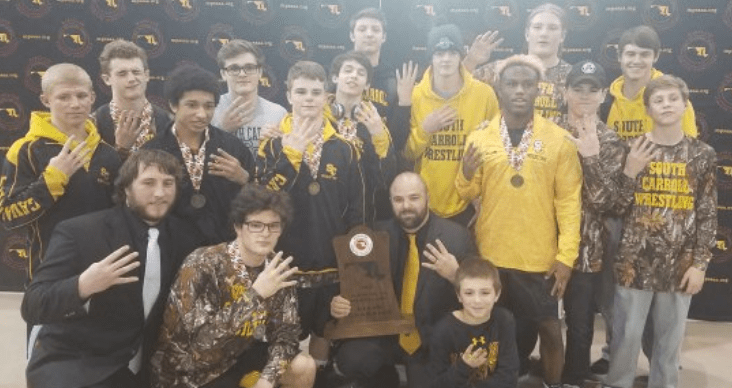 South Carroll brought eight wrestlers to the MPSSAA 2A/1A state wrestling tournament at the Show Place Arena in Upper Marlboro, and saw all eight walk out with awards. The strong showing vaulted the Cavaliers to their fourth consecutive state title.

“This one was extremely rewarding,” South Carroll coach Bryan Hamper said. “Bringing the eight guys, and all eight of them placing, six in the finals, three champs. It really was a team effort. The guys battled from the first whistle to the last. They had a chip on their shoulder from last weekend. We didn’t wrestle really well at the regional tournament, so they were excited to have another opportunity to come out and compete against teams like Middletown, and they stepped up.

“You look at the seniors that are graduating out of our program, Joey Thomas, Jamar Williams, we may never have another kid like those two, and we had two of them at the same time. Both of them capping out with three straight state championships. It was extremely rewarding watching them achieve their goals. I felt like as a team we wrestled extremely well. I knew to beat a team like Middletown we were gonna have to be near prefect. The first day, we went seven of eight in the semis, putting six into the finals that’s really making a statement.”

Thomas (126), last winter’s Varsity Sports Network Lightweight Wrestler of the Year, and Williams (170) both earned their third championships. Thomas, who defeated Owings Mills’ Tyson McDuffy, 10-4, for his title will be wrestling at the University of Pittsburgh next year. He has been on all four state title teams, finishing third as a freshman. In addition to the three state titles, Thomas also set the MPSSAA record for most career wins with 195.

“It feels great,” Thomas added. “But I think pulling off the wins record was an even better accomplishment. This year, by far, I enjoyed the most. I had fun the most. I’ve been here before. I’ve wrestled tougher people out of the state. (I just wanted to) score points, then I knew I’ll win the match. I feel really great being on the team for four years, helping the team out. I really enjoy the team a lot. Working hard a lot, pushing our teammates, and we got the job done all four years.”

Williams joined the Cavaliers’ squad for his sophomore season. His 8-4 win over Perryville’s defending state champion Eugene Zacerous made him three-for-three on title attempts.

“I feel really good ending my season with the state title, on to the next chapter trying to figure out where I want to go next year,” said Williams. “I knew he was going to be a really tough opponent, he’s stronger than me. I’m like 57 and a lot of the guys are 70 something, and I knew he was going to be stronger then me and be more powerful. I needed to stay low and attack. Use my offense that my coaches showed me all year. I think I did pretty well, I went out and attacked and attacked.”

“It feels amazing,” Crawford continued. “Probably the best feeling I’ve ever had in my life. For all these people watching me win and stick it out in a close match to take the championship. I beat some great kids along the way. I knew I had to wrestle tough. He was going to come in with confidence knowing he beat me already and bumping over me in the rankings. I just came after him with everything I had. I watched video of him, and my match with him. I knew what I had to counter, and knew what I had to do to get the championship.”

Frederick County’s Middletown was second on the strength of three champions, Danny Bertoni (138), Adam Bain (152), and Sean Mullican (285). Mullican repeated as a champion, and Bertoni joined the exclusive club of four-time state champions.

“I feel really confident in myself and just confident in my teammates for making me better and my coaches that are in the room,” Bertoni added. “It wouldn’t have happened without them, especially my Dad, too, who is going all around the place getting me practices in the off season and getting me ready for big tournaments so I’m just beyond thankful right now. It feels really good (to be a four-time champion). It took a lot of weight off my shoulders, the match, I had a lot of pressure, I’ll be honest, I just tried to channel it all out and just secure the victory. I was thinking that I just want to go out and do what I’ve been doing and every other match I’ve been in, I’ve been in bigger situations, national finals, so I just tried to look towards that, and my mind set towards that to help me calm down in the match and before the match.”

Baltimore County had a stellar showing crowning three champions, two from Sparrows Point. Grabbing titles for the Point, whose third place showing was their highest ever at the state tournament, were Max Hammond (132) and Ethan Smith (182). Hammond, a sophomore, won his first title with a 1-0 decision over Oakland Mill’s Kyle Farace. Hammond beat Farace, 4-0, at the state dual meet tournament.

“It feels great,” Hammond said. “It’s been my goal since I first started wrestling, it’s always been a dream of mine. I worked so hard, now my dreams are coming true. (I) can’t thank anybody but my coaches for pushing me and showing me what I need to do. I was relaxed but nervous, I was nervous, I just knew I had to stay on my moves and keep working at what I know how to do, and I would come out on top if I did that, and just do what I had to do.”

Smith won his second title, the first with Aberdeen last year. The senior committed to Iowa State earlier this season, but with the news that head coach Kevin Jackson was retiring, Smith decided to go another route and committed to Ohio State on Thursday. He pinned Dunbar’s Dwayne Johnson in the first period, 1:47.

“State title is so exciting,” said Smith. “It’s not the top of my list, I just want to go to Flo (Flo Nationals), get the belt there and just keep my eyes on what I’m going to do at Ohio State. (Being on a competitive team) made it a little better as far as the atmosphere in the room, having people trying to do something as a team, practice was harder, everybody coming there ready to scrap. I’m super excited about (committing to Ohio State), just can’t wait to get out there.”

Sparrows Point had three other grapplers reach the podium, the Fouts brothers, Matthew (106) was sixth and Mike (120) was fifth, Skyler Minutelli (126) landed in the sixth position.

Dunbar represented Baltimore City proudly, bringing home one state championship and two other placewinners. Jorden Pryor (220) won his first title over Century’s Akers. Pryor was holding the lead in the match when Akers suffered an injury and defaulted. Dwayne Johnson was second for the Poets and Avery Thurman (152) was fourth. Edmondson-Westside’s Keon Hunter (285) placed sixth.

Oakland Mills’ Daiquan Anderson (106) made it to the top of the podium one year after finishing as a runner-up. He downed Smithsburg’s Shane Hovermale, 11-4.

“It feels excellent,” Anderson remarked. “I’m loving it. I felt like I performed well. I did what I had to do to win. I wanted to stay focused on the prize, work my game, and stay low.”

The Eastern Shore’s North Caroline crowned two champions, Tyler Bauer (160) and Alex Eaton (195). Eaton, who was a runner-up at 182lbs last year, bounced back from a second-place finish in last week’s regionals to claim his first title.