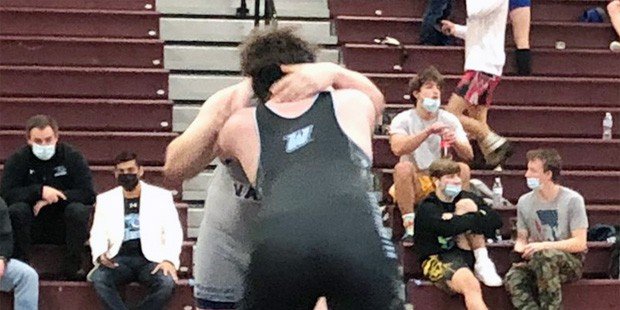 No team scores kept, but shortened wrestling season ends on a successful note

The 2021 Carroll County Wrestling Tournament, as has most sporting events over the last 11 months, had a different look.

The annual event, as usual was split over two days and began at Westminster High School, it’s traditional home, but it came with several modifications. The first day was devoted to the lower weights, with the upper weights taking the stage on day two at Winters Mill High School. In addition, there was no team scoring and schools were allowed to enter more than one wrestler into each weight class.

On Tuesday, which featured weights 106 through 145, South Carroll advance four wrestlers to the finals and all four prevailed with County titles. Junior Ryan Athey (120), sophomore Michael Pizzuto (126) and sophomore Gage Owen (132) ran off a three match victory streak for the Cavaliers in the middle of championship finals and sophomore AJ Rodrigues (145) closed the first day of action with another title for SC.

Athey, who won his third consecutive County championship, and Rodrigues, who won his second, each won by major decision in the finals. It was also the second crown for Owen, who pinned Winters Mill’s Damian Claypool in the first period, as well as the second individual championship for Pizzuto.

Century had two champions, both with falls in the finals, as freshman Caleb Barnhill (106) and senior Carson Fitzgerald (113) reached the top of the podium. Winters Mill senior Zach Kirby was the first day’s other champion, defeating Manchester Valley’s Jake Boog, 9-5, at 138. It was his second County title in the last three years.

Boog was one of three Mavericks to place second, along with Ethan Dell (113) and Travis Green (126). Kirin Naganna of Westminster (106) and Ryan Ohler of Liberty (145) also finished second.

Heathe Hernandez went into overtime to subdue SC’s Brand Athey, 13-8, in the 160 final and the Mavericks’ Grant Warner won at 190 when he pinned South Carroll’s Jackson Moore in the second period.

Manchester Valley also had two more second-place finishers on Wednesday, as Kobe Pennewell (182) and Vinson Smith (285) fell in their finals.

Also finishing in the runner-up positions were Liberty’s Anthony Marco (152) and Justin Richardson (170).