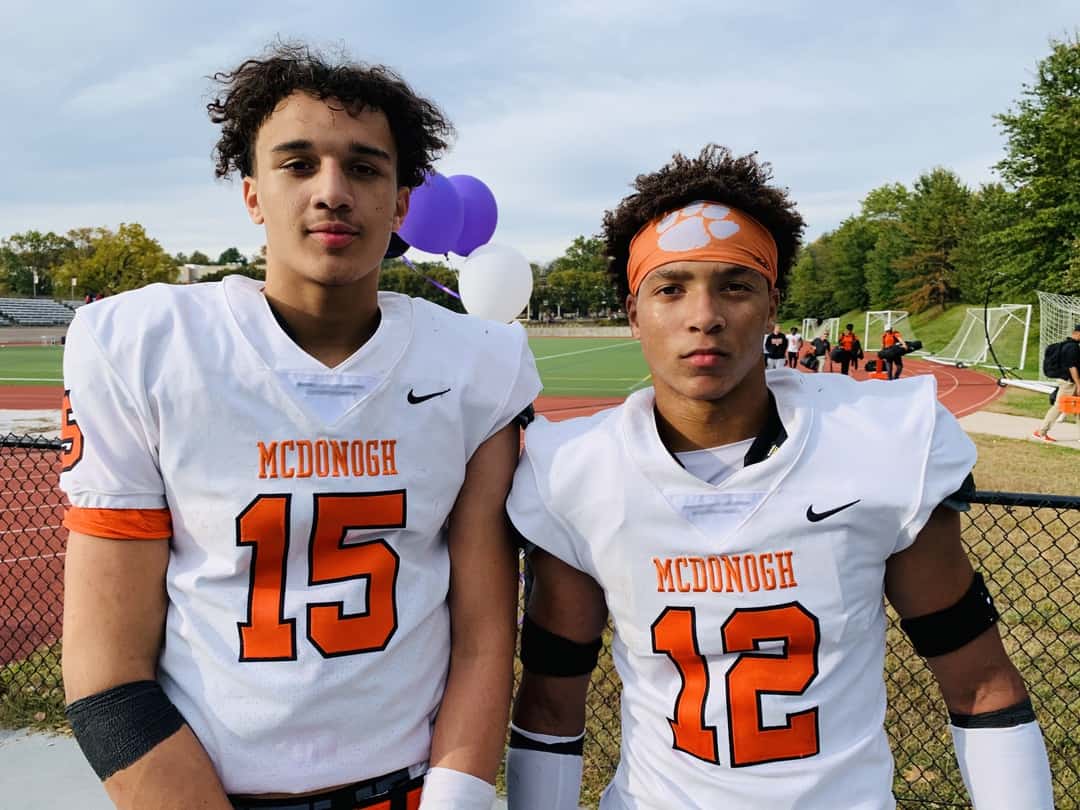 Preston Howard (left) and Dante Trader were clutch for McDonogh football Saturday. Howard threw a 34-yard touchdown pass to Trader with 2:43 left in regulation, and Trader intercepted a pass with 7 seconds left in regulation, preserving the No. 3 Eagles’ 14-7 win over 2nd-ranked Mount St. Joseph in MIAA A Conference action in Irvington.

Dante Trader laid on the turf at Mount St. Joseph’s Pleyvak Field after taking a shot in the 4th quarter of Saturday’s MIAA A Conference football game. After being tended by McDonogh School athletic training personnel, an Eagle teammate asked Trader if he was okay as he returned to the sidelines.

Trader’s 34-yard touchdown reception with 2 minutes, 43 seconds left in regulation, and interception in the final seconds were the defining moments for the Owings Mills school which claimed sole possession of first in the MIAA A (2-0). Curtis Jacobs added a rushing score for McDonogh.

After winning just one league match in a 3-6 showing last fall, the Eagles are an area-best 8-0 and have the inside track to the No. 1 seed for next month’s MIAA A playoffs.

“This is a championship-type game,” said McDonogh second-year coach Hakeem Sule. “We needed to play our game and we did that.”

Behind an efficient offense and an eclectic defensive performance, the Eagles spoiled Mount St. Joseph’s Homecoming. Syracuse University commit Marlowe Wax had a rushing score for the Gaels.

The day belonged to McDonogh and Trader, who’s committed to Maryland for lacrosse, but starting to draw Division I football interest. He had 5 catches for 73 yards including a 12-yarder across the middle where he absorbed a clean shot from Gaels’ defensive back Jordan Oliver.

Six plays later, Trader got behind his defender and brought in sophomore Preston Howard’s throw, giving McDonogh the lead for good.

“It was all in the moment,” said Trader. “I was just trying to grind out from the first half because I didn’t play too well.”

McDonogh got the ball back with 1:24 left after its defense turnover Mount St. Joseph on downs. But the Gaels (6-2, 2-1 MIAA A) gained new life as Harrison Beattie’s 35-yard field goal attempt skirted left with 51 seconds remaining regulation.

Mount St. Joseph wide receiver Dont’e Thornton came down with Billy Atkins pass at Eagles’ 36-yard line with 41 seconds left. After Atkins got sacked by teammate Aidan Hurdle, Trader stepped in front of a pass intended for Thornton with seven seconds to play.

“I saw it all week in film,” said Trader. “I saw the guy roll out on the backside post and broke on it. That’s the game.”

Trader’s pick was the punctuation point on a suffocating defensive effort against Mount St. Joseph’s offense. The Eagles held the Gaels to minus-4 yards rushing and sacked Atkins (11-of-23, 154 yards) five times.

“It was a gritty performance on our end,” said Sule. “When you look at St. Joe, the caliber of athletes they have in that program…those guys lead the MIAA in several categories statistically. We said all week it was going to take a relentless effort.”

“It just speaks to our strength, speed and discipline,” said Jacobs, a Penn State commit who had two sacks. “Last year, we had the speed and strength, we weren’t disciplined. That’s what we drilled over and over during the offseason and you see the result.”

Mount St. Joseph’s defense, as it has all season, was equal to the task Saturday, keeping McDonogh scoreless in the first half for the first time this season. The Eagles methodically broke through in the second half.

With a mix of runs from Giovanni Procaccini (22 carries, 55 yards) and Howard (16 carries, 74 yards), who added a couple of short yardage throws, McDonogh went 77 yards in 14 plays over nearly 8 minutes as Jacobs crossed the end zone with 4:44 left in the third.

Sophomore defensive end Stephen Schulze provided a break for the Gaels, intercepting Howard inside McDonogh’s 40. Seven plays later, Wax (5 carries, 12 yards) got into the end zone, tying the game with 7:31 remaining in regulation.

Faced with a 3rd-and-11 on McDonogh’s ensuing drive, Howard threw a pass in the middle to Trader, who was shaken up after colliding with Oliver. A few plays later, Trader was in the end zone off a “skinny post” route.

“He [Trader] deserves everything he gets on the field,” said Jacobs, who rushed for 25 yards and caught a pass. “He gets up every morning at 6 to get ready for each game.”

Mount St. Joseph coach Rich Holzer was pleased with his defense, which held McDonogh to a season-low 14 points, as well as his offensive line.

“A lot of the sacks we have gave up were coverage sacks. Our strength was our passing game and we didn’t make plays,” said Holzer. “We never got into a rhythm on offense because they kept us off the field for so long.”

McDonogh is off to its best start since its 2011 perfect run (11-0) to the MIAA A championship. The Eagles play at 4th-ranked Archbishop Spalding Friday before its annual rivalry match with Gilman School Nov. 2.

“Since last year we knew this was going to be the result,” said Jacobs. “We kept trying to play it into existence and trying to keep rolling with it, take this to a championship.”