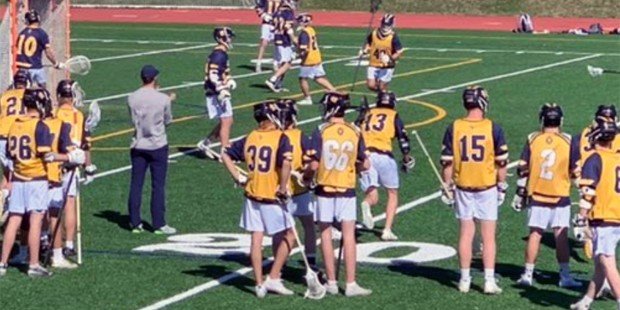 While the rest of the MIAA A Conference got their lacrosse seasons rolling last week, St. Paul’s had to be patient for an extra week. With patience being a virtue, however, the Crusaders were rewarded with a season-opening 10-5 win over Mount St. Joseph, Tuesday in Irvington.

St. Paul’s was in control early, building a 6-2 halftime lead and going up 7-2 early in the third quarter when Braeden Klausner scored on a feed from Michael Smyth. St. Joe (2-2 overall, 0-2 MIAA A) made things interesting, however, by scoring the final three goals of the quarter to close within two, entering the final stanza.

In the fourth, Kabe Clark, with an assist from Noah Chizmar pushed the Crusaders’ lead to 8-5. Smyth, who had three goals and three assists on the afternoon, followed by completing his hat-trick with an unassisted tally, before Jake Bair, from Brody Atkinson, put the icing on the cake with St. Paul’s 10th goal.

Jacob Nottoli and Clark finished with two goals each and Chizmar had two assists. Colin Russell also scored for the Crusaders.